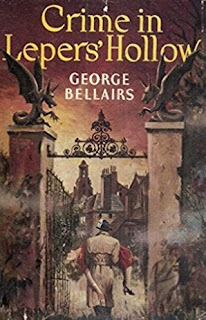 The Man in the Queue (1929) by Gordon Daviot (Joesephine Tey). Tey’s first detective novel, featuring Inspector Alan Grant, and her most conventional. A rather feeble man queues patiently at the theatre and suddenly drops down dead, a stiletto lodged in his back. Grant, who is both a policeman and a gentleman amateur, calls on his colourful network of allies to track down the guilty party. Great fun, and the series only gets better.

Crime in Lepers’ Hollow (1952) by George Bellairs. Inspector Littlejohn is on hoiliday, at something of a loose end – but not for long. Soon he is mixed up in a murder and embroiled in a family saga. I found the book okay; it’s relatively dark and relatively readable, and has all the eccentricities we might expect from Bellairs. But it’s not one of his best, perhaps because of the very slow start.

Detectionary (1977), edited by Otto Penzler, Chris Steinbrunner, and Marvin Lachman. This is a really useful resource, listing and describing major characters, writers, titles, and adaptations. Sadly, it is not exhaustive, and I don’t believe it’s been updated, but it’s still thoroughly useful. And it’s interesting – it’s strange to see which characters were considered major and which were not, forty years ago.

The Spectrum of English Murder (2015) by Curtis Evans. This book explores the crime fiction of Henry Wade (Lancelot Aubrey-Fletcher) and G.D.H. and Margaret Cole, who occupied firm positions on the right and the left of British politics respectively. Evans has an insightful and diligent approach, making his subjects come alive, and illuminating their under-valued crime fiction.
Posted by A Sign of the Crimes at 17:00