Death in the Tunnel by Miles Burton 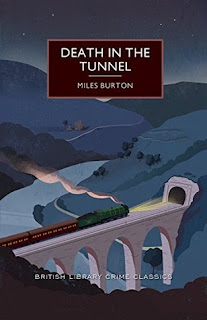 What is it about golden age mysteries set on trains? I have two theories. The first is my scholarly view: we have to put these 'transport mysteries' into context. The sealed transportation pods provide closed communities, but (vaguely) democratised ones -- think Murder on the Orient Express, where people from several continents and all walks of life are bound together and can't escape -- and they represent both closed space and spacelessness, especially when a vehicle travels internationally. In the interwar years, this is mass-communication and technology at its apex, hurtling towards an uncertain future that might or might not open up the world.

My second theory is much more mundane: I enjoy the complete disparity between how trains were and how they are. Third class carriages, attentive, class-conscious porters, smoking carriages, slipping the guard a banknote to get a whole section of the train to oneself, the very concept of climbing onto the roof... it's fascinating social history.

Death in the Tunnel (1936) was written by Miles Burton, a pseudonym of Cecil Street (he also wrote as John Rhode), one of the most prolific of the golden age novelists, who is just coming back into print with the British Library's Crime Classics series. It features Burton's well-to-do amateur sleuth, Desmond Merrion, and his sparring partner, the extremely limited Inspector Arnold.

Arnold is investigating the death of a wealthy baronet, who has apparently committed suicide on board a train, as it passed through a tunnel. Unconvinced that it is suicide, he calls on Merrion who, initially, fails to smell a rat and politely tells the Scotland Yard inspector to do one. But then Merrion is struck by the fact that the baronet seemed to be travelling without a ticket, and the faint whiff of rodent sets him on the trail of a murderer -- or murderers.

I enjoyed Death in the Tunnel, my first experience of Street's fiction, more than I expected to. Street has often been described as belonging to the 'humdrum' school and was often the butt of his fellow writers' quips because of a perceived earnest focus on plot over and above any form of engaging the reader: Nicholas Blake once wrote that Street tended to create 'ciphers in the place of characters'. And it's true that psychology doesn't enter into this book at all, beyond the question of Why would a very wealthy man commit suicide? He was rich! Obviously he didn't kill himself! There is, however, a very complex puzzle which is unravelled bit by bit so that it doesn't feel too complicated in the reading. It's amazing, really, how an impossible crime -- a real locked-room scenario -- gradually unfolds into one inevitable sequence of events.

The characters are stock figures and are introduced in very few words -- 'the chap appeared, round-faced, and betraying no marked symptoms of intelligence' -- whereupon they conform to type. When we meet 'a middle-aged man of morose disposition', we are not floored to find out that his name is Mr Bleak, and he doesn't perk up. Gladys Mitchell and Agatha Christie also sketched their characters in very few words, but they took great pleasure in playing with our expectations -- they knew that we would recognise a few traits and make certain presumptions, then be shocked to have those presumptions turned on their heads. Nothing is turned in Death in the Tunnel. Instead, events progress in a linear manner and characters do not progress at all. They are so many chess pieces.

There is, however, great fun to be had in the relationship between Desmond Merrion, with his unapologetically wild imagination, and the stolid, sensible Inspector Arnold. I found Merrion to be a nice twist on the upper-class amateur who tends to be overly scrupulous about evidence. Instead, he goes off on wild tangents and is happy to employ blind guess work, without feeling bound by his thesis. This horrifies Arnold, who nonetheless can't complain about the results.

Once Merrion has explained the solution to the puzzle, things happen very quickly. There is no subplot to tidy up, no romantic triangle to resolve, no running joke to wheel out. We are simply told that the guilty party faced the hangman.

I thoroughly enjoyed Death in the Tunnel and am looking forward to reading The Secret of High Eldersham (1931), published in the same series and dutifully lined up on my TBR shelf (which is a real, physical thing). Street/Rhode/Burton is hardly a neglected genius, but I'm very pleased to see him back in print.
Posted by A Sign of the Crimes at 08:00