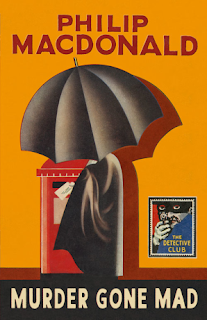 This might or might not be interesting: while most images on this blog are shamelessly sourced from other websites, I always make an effort to illustrate the exact edition I read. If that makes sense. So the cover image here is the same as the one I'm working from. If I've read the book more than once, I'll try where possible to illustrate the edition I first read (in some cases, e.g. proofs or manuscripts, or if it's visual or audio media, this won't be possible and the nearest approximation will be found). Perhaps that knowledge has made you richer. Perhaps it hasn't.

All of which brings me to the beautiful books that have been issued by Collins Crime Club since 2015 under the revived banner of ‘The Detective Story Club’. The brainchild of David Brawn, this revival project is very much in the vein of the British Library’s ‘Crime Classics’ series, bringing back neglected gems of the golden age with — where possible — adapted original cover art.

The books themselves are absolutely exquisite to behold. The boards are black and gold, emblazoned with the famous ‘man with the gun’, evoking this precursor to the world-conquering Crime Club — although not all the titles were originally Detective Story Club books.

Philip Macdonald features prominently in this series. He was a relatively prolific writer, and you will know some of his work even if you don’t know the name. That’s because, as well as writing detective novels, he wrote screenplays for Hollywood, where his efforts included Love From a Stranger and Hitchcock’s masterpiece, Rebecca. Macdonald didn’t think much of his fiction and, for a good many years before and after his death, critics and readers agreed. But now, it seems, we’re coming round to a different opinion. The Rasp, The Noose, and The Maze are all being reissued for the first time in years (he did like his two-word titles, did Macdonald) and, of course, the subject of today’s review, Murder Gone Mad (1931).

This thriller, my first experience of the author, is apparently unusual among his work. For one thing, it doesn’t feature his usual sleuth, Colonel Anthony Gethryn, but, instead, a likeable Scotland Yard inspector called Arnold Pike. The criminal under investigation is a serial killer apparently motivated by nothing but the love of killing. Hence the title: there’s no way the detectives (or we) can remove or focus suspicions on the grounds of motive. In the blurb, Murder Gone Mad is described as ‘the first Golden Age crime novel to feature a motiveless serial killer prompted only by blood lust’ and that is a telling expression.

Because blood lust, of course, is a motive. But for the purposes of this novel, for the reasons outlined above, it isn’t. That is to say, questions of psychology are irrelevant. Macdonald is concerned with one thing: telling an entertaining story. His fiction or, at least, this example, carries no baggage of any sort and in that respect, Murder Gone Mad is more perfectly like the popular conception of a Golden Age crime novel than anything else I’ve read.

The serial killings take place in the peaceful town of Holmdale and the targets are completely unrelated and from a range of social backgrounds. They are killed in absolutely brutal ways. Meanwhile, the killer, known as ‘The Butcher’, sends duplicate letters to the police and the newspapers. The letters are sadistically playful and erudite, and they remind me of the shameless exhibitionism in Jack the Ripper’s notes. There’s a particularly sinister way  in which these notes mock the bureaucracy at the heart of the novel. One ends like this:

I hate causing unnecessary pain to others and am, therefore, undertaking to give you warning wherever possible of any future little jobs which I may be contemplating. This will, don’t you think? add quite another spice of excitement to our game?

They also made me think of the letters which appear in Agatha Christie’s The ABC Murders, published a few years after Murder Gone Mad (but in ABC, of course, there is absolutely a motive, and there is some brilliant psychology).

According to the blurb, and to L.C. Tyler’s introduction, the crimes in this story are inspired by the Dusseldorf killings of 1929 but beyond a passing reference in the text I can’t see much evidence of this. It’s possible, of course, that the discussion of localised serial killings which arose from the incidents sparked something in Macdonald’s brain, but beyond the use of sharp instruments and specific geography I can’t see any similarity between the two cases.

At a loss to explain the crimes, and with the media breathing down their necks, the police agree that ‘[t]his isn’t a job for a man so much as a job for an organisation’, and they call in Scotland Yard. The Yard takes the form of Inspector Pike, who single-handedly proves that is is, after all, a job for an individual. It’s fascinating to watch the process as Pike whittles down six thousand suspects to just four, with his investigations punctuated by police reports and newspaper clippings.  He even introduces an early example of CCTV monitoring. There is also a nice amount of observation, as we watch the town enjoy its new chaotic infamy. ‘Holmdale’, writes Macdonald, ‘would have vilfied you for making the allegation, [but it was] very delightfully excited.’

It’s also easy to rattle along with Macdonald’s unpretentious prose. You can tell that he’s cut out for screenwriting, for instance when we follow one victim in his final moments:

He thought he saw, dimly through the dark, a figure leaning against the rail to one side of the stile, but he was not certain until, from just behind him, there came a voice. It said:

‘I wonder whether you could help me.’

Albert Rogers turned, swaying a little with the movement. [He] started to say — he was always a civil boy — ‘I beg your pardon…’ But he got no further than the ‘beg’.

[…]  A little stifled cry, like the squeak of a small injured animal, came from his mouth. He doubled, his hands clasped vainly to his stomach. His knees crumpled beneath him. He felt light, light …

The flip side of this writing style is that Macdonald has a tendency to, (a) jump into dialogue before introducing the characters, and (b) give us bizarrely thorough descriptions of the characters including their exact weights and measurements. I don't hate this; I find it weird and interesting.

What does infuriate me is a habit Macdonald has of presenting dialogue. AB, said X, CD. So, here are some irritating examples:

See, there are two better places the break could have occurred. Here’s another example, which occurs when an apparently homeless woman is asked if she’d like some cocoa and snacks:

Again, and I’m not going to mention the irksome accenting, the division of the sentence is not quite logical. In fact, it almost ends up presenting the opposite of what it's meant to.

But the thing that really riles me is the ending. The whole thing just ends too abruptly, with the killer being identified and caught — in a very cinematic and extremely gripping sequence — but with absolutely no explanation. Not for the motive — okay, it’s ‘blood lust’ but even this isn’t explained — not of the murderer’s response to being caught, not of the repercussions for victims and their families. The clues and red herrings are never explained. From Chapter Two onwards, I was convinced that one of the crimes under investigation had not been committed by the Butcher, and although I must have fallen for a red herring, I feel that this matter should at least have been dealt with in some sort of summary. But in the end we get nothing. Just a villain carted away by the law. Compare to The ABC Murders.

Although I hardly ever read crime stories specifically to tackle the puzzles, I am looking forward to reading Macdonald’s The Maze, which is told as a set of archived documents and interview transcripts and was designed to be an exercise in fair play. The author prefaces it with a claim to being ‘absolutely fair to the reader. There is nothing — nothing at all — for the detective that the reader has not had’, he writes.

This is a fair story. [Whether] you get the right answer [or not,] you should be satisfied — unless of course, you find the whole business too impossibly easy, in which case you ought […] to became a really big noise in Scotland Yard.

Such a gauntlet is impossible to ignore.

These niggles might present an unfair image of the book. I really did enjoy reading it and am glad that it’s back in print. I’m certainly happy to have read it and did not have a single dull moment turning the pages. It’s just that the ending left me a little less than satisfied.

And while we’re on the subject of minor disappointments — the sour cherries on the top of splendid cakes — I’d like to return to the matter of the publishers. These books are, as indicated, physically beautiful, but they have been barely proofread. The pages of an old manuscript were presumably scanned and reset, resulting in some typos, odd word choices, or missing words. And then there are the blurbs which are not always brilliantly written (this one isn’t that bad, but the one for The Maze, in the same series, is almost illiterate). The worst example of such inattention that I’ve seen so far is in the Crime Club edition of News of Paul Temple by Francis Durbridge, which also has a horrible, stock-photo-ish cover. I wish that a little bit more effort would be invested into these wonderful and significant projects.

To return to Murder Gone Mad, I found it thoroughly enjoyable. The author comes across as being as experimental as CHB Kitchin and as accessible as Ellery Queen, and I’d like to read more. This might not be the most substantial serial killer thriller around, and is not without its faults, but I don’t think anyone could call it forgettable.