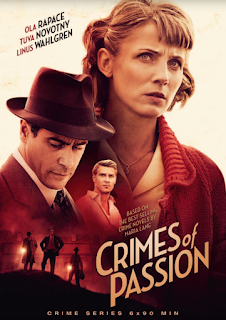 Maria Lang (1914-1991) has been described as ‘Sweden’s Agatha Christie’ and although I haven’t read any of her work, I gather that she has a better claim to the title than Camilla Lackberg. A university professor (Lang was a pseudonym for Dagmar Lange), she was a prolific producer of traditional mysteries with occasional dark or provocative themes. Crimes of Passion (2013) is a set of six standalone films based on novels by Lang, designed as an antidote to Nordic Noir, with one eye firmly on the export market. Both at home and abroad, it was a spectacular flop. Here is the twist: I like the series.

As with each season of Wallander, the first 90-minute episode of Crimes of Passion was broadcast in Swedish cinemas, and subsequent instalments went straight to DVD. The mistake here was that the first episode is by far the worst. It is almost unbelievably boring, and it’s little wonder that the whole thing was panned on the strength of the first episode’s reviews. In fact, despite trying three times, I couldn’t make it to the end of this episode. I had to switch off two thirds of the way through. There is one very uncritical reason I persevered and tried Episode Two: because everything about the show is absurdly pretty and I like pretty things.

The series also flopped as a UK export. Broadcast late at night in 2014 on BBC 4, the station that picked up some of the grimmest gems of Scandi Noir, Crimes of Passion was sold to the public as ‘Mad Men meets The Killing.’ It isn’t. It just isn’t. It’s light, cosy, and nostalgic. It’s the opposite of The Killing. I can’t help but agree with the Guardian’s reviewer, Vicky Frost, who opined that there was nothing wrong with the series; it was just being sold to us in the wrong way and would be more at home on ITV 3 than non BBC 4. That said, I don’t think it would work on any ITV station unless it was remade in English, and I’m sure producers would find a way to cock that up.

Frost also takes the series to task for failing to pay more than ‘lip-service’ to ‘issues’:


When Lange first wrote her mysteries in the 50s, her inclusion of themes such as lesbianism, the suffocating reality of marriage for women, or the scandal of children born out of wedlock would have had real impact. Here, they are dealt with somewhat half-heartedly; Puck’s reservations about marriage dealt with by a cheery “Let’s do things differently!”. It feels more like lipservice to the era than, for instance, the serious questioning of society found in the Swedish crime-writing of Henning Mankell or Maj Sjowall and Per Wahloo. Which is all the more frustrating given that one of its detectives is, unusually, a woman.


I do not know if Frost has read Lang’s fiction — again, I haven’t, and I'd like to hear from someone who has, because I’d love to know how she handles these issues. All I know, from a bit of Googling, is that the inclusion of a gay male couple in her first novel caused a few eyebrows to arch. I also know that Puck in the books (I’ll explain who she is below, but she’s the star of the show) just acts as an assistant to the main detective, who is the policeman. I know she only appears in a few books before being married off and replaced. I don’t know if Lang ever tried to seriously tackle societal issues. Three of the books have been translated into English, and maybe I’ll get round to reading them one day … if you’ve read them, would you recommend them? At any rate, there’s an argument and a place for escapist crime fiction in most societies.

So much for context. When it comes to the programme itself, the first thing to note is that every scene, every costume, and every actor is ludicrously pretty. The set-up is this: a very attractive PhD student called Puck (Tuva Novotny), and her very very attractive boyfriend-then-husband Eje (Linus Wahlgren, whose idea of emotional range is varying shades of the same goofy smile), help a very attractive policeman called Christer to solve murders in a 1950s Swedish mining town. Christer is played by Ola Rapace, AKA Stefan Lindman in Wallander (2005). But in that series, he was angsty, aggressive, and troubled. Here, he is an avuncular pipe smoker whose biggest problem is working out which unsuitable woman to sleep with next.

As for the plots, I think they’re quite good. They’re not great, but each time there’s a steady central mystery with a reliable reveal and enough impact on the unfurling story of Puck and Eje’s evolving, then strained, relationship. It’s rather sad to see, in the final episode, that Puck becomes a published writer — because clearly this was the screenwriters paving the way to have Puck take a central role in future adaptations. In the later books, the character is replaced by Lang’s equivalent of Ariadne Oliver, an eccentric mystery novelist. Of course, there won’t be any more episodes. This doesn’t bother me too much: I’m not invested in Puck, Eje, or Christer. I deliberately chose to watch something light after ploughing briskly through all of The Bridge, all of Wallander (that ending was marvellous, wasn’t it, and brutal?), and most of The Killing. Well, Crimes of Passion, with its nebulous 1950s escapism, couldn’t be lighter.

Here is a summary of the six episodes, and my thoughts on each:
No one gives a spectacular performance in Crimes of Passion and I don’t know if the screenwriters have done Lang justice or not, but the scripts are okay. The whole thing remains consistently watchable. If I was a knitter, this would be the perfect programme to knit in front of. It’s absolutely everything  people think ‘cosy crime’ is: entertaining, easy, and a bit pointless. If there had been more episodes, I would have watched them for sure, but I’m not deranged with grief that the show was cancelled.