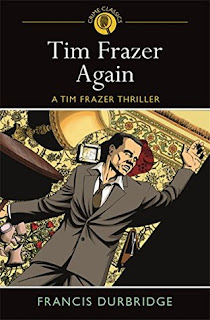 The Saltmarsh Murders (1931) by Gladys Mitchell. An absolutely delightful, waspish parody of village mysteries, most obviously The Murder at the Vicarage, featuring the captivating Mrs Bradley.

The Labours of Hercules (1947) by Agatha Christie. Hercule Poirot decides to retire with twelve cases, each resembling one of his namesake's labours. These cases prove to be hit-and-miss, but overall an excellent bridge between the carefree early Poirots and the sombre late Poirots. Needless to say, he doesn't retire.

Tim Frazer Again (1964) by Francis Durbridge. The thing I like about Durbridge is his innocence. When he tries to write cynically, with a tough secret agent protagonist, the whole thing falls flat. Tim Frazer is not an impressive creation.

Derailed (2003) by James Siegel. Forgettable, well-plotted and poorly-executed thriller which has, I think, been filmed. Reading it, one gets the impression that the author would rather be writing a treatment for Hollywood. Assuming that all women exist only to annoy men, the twist is quite obvious.

A Talent for Murder (2017) by Andrew Wilson. A thriller in which Agatha Christie herself is blackmailed into a murderous conspiracy. Wilson's page-turner is grounded equally in extensive research and an expansive imagination.
Posted by A Sign of the Crimes at 19:00