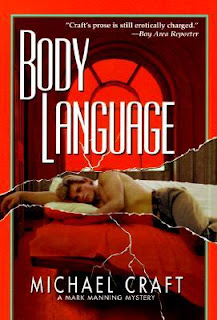 I want, desperately, to like gay detective fiction. But most examples that I've read are just very, very bad. I'm looking forward, in the near future, to reading the classic The Heart in Exile by Rodney Garland, but until then I'm stuck with books that I simply don't like.

If you can recommend a good gay detective story ... please do!

Anyway, here is Body Language (1999), a Mark Manning whodunit by the American writer Michael Craft. It's generally considered one of his best -- probably because it's got the makings of a good mystery hidden somewhere beneath the ridiculous prose. And that mystery was dreamt up by Agatha Christie. To give the author his due, he credits 'an Agatha Christie play' with providing him 'the inspiration' (i.e. the solution) for this book in an afterword.

When I could switch off enough to get past the writing (and Craft isn't that bad, really; he's just more Archer than Amis), the narrator's arrogance would pop up like an untended pimple.  Every other page Mark Manning is telling us how everyone fancies him, how hardworking he is, and how he can outrun youths. Despite this, he seems to do very little but flounce around, graciously accepting adulation, conveniently summarising everything that's just happened to his boyfriend who was there anyway, and failing to grasp the screamingly obvious solution to the crime until a second murder has happened. The arrogant sod even works out that someone doesn't fancy men because they don't orgasm when he touches them. Seriously.

It's like a bad midlife crisis fantasy. The only piece of writing with any drive or animation is a sex scene towards the end -- which makes one wonder how excited the author was, when writing it. But the worst crime between these pages is the author ripping off Christie's at-the-time little-known The Unexpected Guest. Worse, though, he doesn't actually follow all the threads of the story he's ripped off, so we have plot points leading up to certain expositions and ultimately not resolved.

If the mystery is, as Amazon's army of gushing reviewers claim, this book's redeeming feature, then I advise all readers to go and read or watch the Christie play to see the same mystery better-developed and more engagingly worded. Even Charles Osborne's disappointing novelisation of The Unexpected Guest is better than Body Language. But if you're looking for a badly-written cringe fest which is also quite incesty, or you want to see how to hash a decent idea that was never yours in the first place, then I thoroughly recommend Body Language.
Posted by A Sign of the Crimes at 18:48