Death of a Philanderer by Laurence Meynell 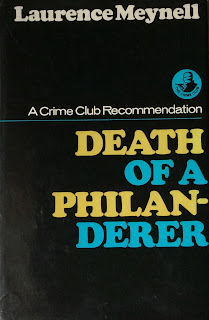 Laurence Meynell (1899-1989) was a prolific writer from Wolverhampton, who fell out of vogue almost immediately upon his death. In his 60 year career, her wrote over 170 novels, including a successful crime series featuring the layabout private eye Hooky Hefferman, and a relatively well-received children's set about a cat called Smoky Joe. I've long meant to read a Meynell and, to my surprise, found that I already owned one of his books: Death of a Philanderer (1968). So I gave it a go.

Death of a Philanderer -- obviously not a children's book, but a 'Crime Club Recommendation', no less -- features no recurring character, as far as I know. The hero is a prolific popular novelist and media writer (like Meynell) called Anthony Langton, who has been commissioned to write a pamphlet for an exclusive girls' school. As soon as he accepts the commission and visits the school, things start going on.

For one thing, all the money collected at the school fundraiser goes missing. Then, an absolute blackguard from the headmistress's past rears his well-groomed head, and takes an unhealthy interest in the schoolgirls. The unsavoury Philip Carver has also managed to find a way to defraud our hero out of hard-earned royalties, and is generally a terrible human being. Eventually, he is murdered. But this is not a murder mystery; Carver does not die until quite near the end, and the bulk of the book follows his march towards execution.

This book felt very 1960s to me, so I would be interested to see if Meynell's managed to come across as equally of his time in, say, the 1920s and the 1980s. There are acerbically drawn characters like a baron who will only eat 'natural sea salt' from grubby paper and soda bread because it's 'the only form of bread not actively infected by cancer', and one character's hypochondriacal mother who resents her children because they don't get, or aspire to be, ill. Peppered among these are sexy ladies wandering around inexplicably naked, and some vaguely witty lines, like 'Cigarettes were invented by ham actors who haven't learnt what to do with their hands on stage.' It's blokey, but not in an alienating way.

Langton doesn't solve the mystery, although he does foil the murderer. By the end of the novel, we know who killed Carver, but very few of the characters do, and Langton is a suspect in the court of public opinion. His journalist friend assures him:


Don't worry [about media coverage. K]eep your mouth shut and say nowt and it will all be forgotten in ten days. President Mao will drop an H-bomb, or the pound will jump out of the financial window, or some sportsman will assassinate the General -- there'll be some little diversion, you see, and whether you murdered the chap under the bed or not won't matter any more.

The narrative is straightforward, but it covers a range of emotional issues, from hero-worship to psychological abuse. Some sequences take place in a gay bar, which is always interesting. Based on the author's descriptions of the gay bar, I would guess that he wasn't writing from experience.

Sometimes Meynell lets us get inside the heads of other characters, including the murderer, the despicable Philip, and the headmistress. With her chapters, we see that, while Meynell's characters exhibit some problematic attitudes towards women (for which the narrative punishes them), Meynell himself does not seem to. He totally objectifies women in this book but not, as far as I can see, in an over-the-top or dehumanising way. He achieves that rare thing among male writers: creating a female narrator who is a person.

Tl;dr, Death of a Philanderer was fine. I doubt it's Meynell's magnum opus and I can't imagine he agonised over it. But that's fine, because no one's going to agonise over reading it. It's not a whodunit and it's not any kind of thriller. I'm not entirely sure how to categorise it, but it does the job as a light read. I hope to read more from this author.