Poison for Teacher by Nancy Spain 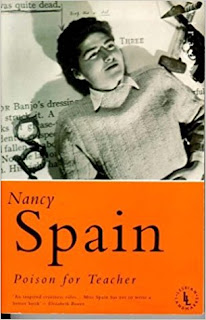 A few years ago, researching for my PhD on Agatha Christie and queer theory, I came across some entertainingly pithy reviews in a 1950s tabloid archive. The byline named Nancy Spain, which was a new name to me at the time, but from the flashy photograph and the fact that the reviewer was clearly supposed to be as big a deal as the reviewee, I decided to Google her.

There was little information online at the time, but over the years the name has stuck and I've garnered a working knowledge of Nancy Spain. A niece and biographer of the Mrs Beeton, she was an early media celebrity: a gossip columnist and a regular on television panel shows such as What's My Line? Spain cultivated a frothy, acerbic, camp persona, and lived relatively openly with another woman (Joan Werner Laurie, a founder of She Magazine). When the couple died in a plane crash in 1964, Spain's close friend Noel Coward said, 'It is cruel that all that gaiety, intelligence and vitality should be snuffed out when so many bores and horrors are left living.'

What I didn't know until recently was that Spain did not simply review detective novels; she wrote about ten. These include Death Goes on Skis (set in a resort called Schizo Phrenia) and books with titles that tell you everything you need to know about the tone: Murder Bless It, Cinderella Goes to the Morgue, Out, Damned Tot...

None of these is in print any more, but one is fairly easy to get hold of. Poison for Teacher (1949) was reissued in 1994 as part of Virago's Lesbian Landmarks series, making second-hand paperbacks easily obtainable. So I bought one for 37p and gave it a go.

Alison Hennegan's introduction makes clear why Spain's work has fallen out of print, and why it was a struggle to get this, her least problematic title, included in the series. Hennegan writes of 'apparently racist and anti-semitic attitudes' which pervade the text. She pulls out the old defence that these attitudes only appear in dialogue and therefore exist as satire above anything else, but I don't find any evidence in the text to support that reading. The well-trodden 'it's ironic' defence is an easy one that people use as a get-out-of-jail-free card when confronting their enjoyment of problematic texts, and I first noticed it when I was a theology student and my lecturers were trying to justify some of the more horrific elements of scripture.

So I'm not going to dwell on the racist, anti-semitic, and, in fact, homophobic character portraits here because they are not pleasant. If we can avoid these -- and there's no reason Spain can't be edited and reissued, as Wheatley has been -- then we can get down to the business of enjoying the campy narrative.

The mystery centres around an exclusive girls' school called Radcliff Hall (ho ho ho... the essence of camp humour is that the codes are easy to break but only 50% of straight people will recognise them as codes). The school's headmistress calls in two detectives, Miriam Birdseye and Natasha du Vivien.

Birdseye is a rather wonderful creation: based on Hermione Gingold, she's a gregarious, thrice-divorced burlesque dancer who 'keeps theatre hours', dispises children, and has a photographic memory. She also gets the best lines:


'I always used to tell my husband he was going mad,' [Miriam] said. 'In the end, he did,' she added triumphantly.

Only one character recognises Birdseye from her career on the stage -- a police sergeant who is sufficiently starstruck upon coming face to face with 'Miss Birdseye of Positively the End and Absolutely the Last or whatever them revues was called' to reveal a load of confidential information.

Natasha is a former-ballerina from Russia and she is just getting bored of her husband, a former wrestler who was the hero of previous novels.  She leaves Johnny du Vivien at the beginning of the book and sets up an agency with Miriam, called Birdseye et Cie. Their first client tells them that something is afoot at Radcliff Hall, and, to cut a long story short, our two heroes enrol as teachers, becoming quickly involved in a school play, with staff and students among the cast. A survey of golden age crime tells us that boarding school plays are lethal, and, sure enough, on opening night, one of the teachers dies on stage.

The investigation that follows centres around a randy doctor, some extremely petty teachers and parents, an utterly mundane detective novelist, and the usual round of irritating children who mostly keep out of things. The mundane detective novelist is rather interesting: he writes gripping, adventurous, puzzling plots but straight out refuses to believe that anything remotely surprising could ever happen in real life. And the doctor  despises him and all he stands for, providing the book's obligatory meta moment: 'I never read detective stories', he says. 'They appear to me to combine all the worst faults of the crossword puzzle and the Grand Guignol, with none of the compensations.'

If Spain is doing one thing, it is avoiding this diagnosis for her own novel.  I enjoyed her brutally laconic way with words. Here is how she introduces one character, Roger, who is blatantly gay and who has appeared in a previous book:


He was dressed as a young American with a white shirt and a hand-painted tie and a very nasty red-plush hat. It was the sort of hat that is left unsold in the shop windows in the Charring Cross Road. He had no socks on. He was staring gloomily at his lean brown ankles, crossed one over the other.

When Natasha decides that she simply has to catch the killer, it is not for orthodox reasons, but for aesthetic ones:


She was sick of enforced confessions and spectacular and unresolved endings. She wanted no more murderers committing suicide [...] Nothing short of the Old Bailey and a darling judge in a black cap would satisfy her. It is quite possible that Natasha hankered after a gracious appearance in the witness-box. Possibly in hyacinth blue. Yes, hyacinth blue would be exactly right for a witness for the Crown.

There is a definite focus on clothes in Poison for Teacher, and I would love to see what Clothes in Books might make of it. As a non-clothes-y reader, I can only say that reducing criminal justice to a 'darling' 'black cap' and a chance to be seen in 'hyacinth blue' adds the the spectacular campiness of the mystery.

And it is a mystery, but I haven't focussed much on that element because the pleasure of reading lies more in the wit than in the plot. In fact, although I read Poison for Teacher just three weeks ago, I had to scan the list of character names which graces the front page to remember who died and which of them dunit. All in all, Poison for Teacher is worth reading, and not taking too seriously, if you like old campiness, and if you happen to come across it. I think that's the best way to put it.
Posted by A Sign of the Crimes at 19:05