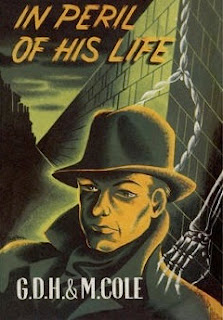 Something has always confused me about G.D.H. and M. Cole. It's simply this: nobody seems to agree on them. Some people think they authored golden age crime fiction's most neglected gems, while others consider their corpus an absolute snooze fest best consigned to the dustbin. For my part, I have little knowledge of them beyond the interesting information about their lives in Martin Edwards' The Golden Age of Murder and the fascinating insights that Curtis Evans gives on his blog.

In fact, I haven't been able to work out a coherent view of their work myself, and I think I've stumbled upon the reason. For context: in my head, I've read loads of their books, but in fact In Peril of His Life (1938), which I read three days ago, was my first.  I've been getting them mixed up with E. and M.A. Radford and with the very un-similar Richard and Frances Lockridge. All I had actually read by the Coles before this one was a chapter in The Floating Admiral, which I hated (the chapter, not the book), and a short story called 'In a Telephone Cabinet', which I adored. I wonder if G.D.H. wrote one of these and M. wrote the other.

Anyway, who were G.D.H. and M. Cole? They were a husband and wife team whose claim to fame was scholarly socialism, and whose chief source of income was crime fiction. The general consensus is that their early novels are good if unremarkable and their later novels are a bit dull. The Coles' marriage was ... interesting ... and that's fodder for another blog, not this one. As for the work, in his glorious 1941 volume, Murder for Pleasure, Howard Haycraft wrote of the Coles that:


In recent years the tales have shown a lamentable tendency in the direction of slovenly construction. [...] Without doubt the public-minded authors have laudable uses for the pecuniary rewards that their detective novels bring. Nevertheless, one can not help wishing they would abandon their schedule of two or three books a year [...] in favor of some less taxing method of work that might permit them to approximate their early achievements in the field. At best, they are a credit to their avocation; at their least, they represent the British police novel at its most British -- and dullest.

At 126 well-spaced pages, In Peril of His Life is less a novel than a novella, and, after discovering J.F. Norris' excellent Pretty Sinister blog, I now know that it was originally published with two others in a single volume, Mrs Warrender's Profession. These reissues were committed (I think that's an appropriate word) by other publishers -- in this case, Hennel Locke -- to turn a fast buck when the Coles continued to dominate sales but had slowed down their output. Honestly, though, I thought 126 pages was more than enough.

Here is the plot: Lady Robinson is the wealthy patron of a mysterious organisation known as the New Money League. Nobody really knows what the league does, except rearrange money in some socially conscientious way. I take this as a satire on the various left wing organisations springing up around the authors. Certainly, they make no effort to describe the workings of the group; they simply state in a tongue-in-cheek way that the sole 'reason why the millions of [Lady Robinson's] fellow countrymen were not supporters of "New Money" [was] that they had not heard of it.'  Those who had heard of it, they add, did not 'know what it meant.'

The New Money League is forgotten about half way through as the plot progresses. Lady Robinson is murdered and the police make a cast-iron case against a young hanger-on, Charles Cornford, who has been moping about confused by Lady Robinson's claims that he was out to kill her. As the evidence builds up, a rather earnest detective, James Warrender, is commissioned to clear Cornford's name. In this, he is greatly influenced by his mother who is determined -- for reasons known only unto herself -- to set up the accused's girlfriend with another more suitable man: 'You must get him out of danger, James', she tells him, 'and then she won't be interested any longer.'

I quite enjoyed Mrs Warrender's bluntness. She introduces characters in a way that tells us more about her than it does about them. For instance:


Leslie Jameson. Oh, you do know her, James! Dr Jameson's daughter, who quarrelled with her father because she became a socialist or a vegetarian or something of the sort, and went to work in an office! The pretty girl in pink, who came to tea the Sunday all the Bankses were there and the light fused. Yes, I knew you'd remember her...

It's often struck me that left-wing authors write decent right-wing crime novels, and right-wing authors write decent left-wing crime novels. From my limited experience of the Coles' crime fiction, the narratives -- and the heroes of these narratives -- seem quite intolerant towards un-landed diversity. I wonder if this is about letting out the side of us that we don't want to present in real life: like Val McDermid's thesis that the gorier the fiction, the kinder the author. McDermid is another socially liberal person who writes conservative novels.

James Warrender is really a terrible detective (this isn't a bad thing, because he has his mother to steer him). Despite years of professional practise his only apparent knowledge of the industry comes from the pages of detective fiction. He ends up using the fiction of R. Austin Freeman to quite ingeniously explain how Cornford's fingerprints at the crime scene were forged. I do enjoy self-referentiality in crime fiction, but other writers do it a bit better and less clunky. Perhaps we can blame the shortness of the narrative?

Perhaps we can also blame length for the fact that the mystery itself doesn't really go anywhere. I kind of enjoyed the bored and blatant way the authors get down to facts. For example, here, on page 83, when we finally get a list of suspects:


'Can you remember who else took part in this experiment, for example?'

'Well ... There was Charles, and Frank, and me for a start. And--' gradually she recollected two or three other names.

Cut out the middle men -- literally! This feels silly to read but it's not a million miles off Ngaio Marsh saying, 'Of course the servants can't have been involved,' and leaving it at that. When forced by relatives to watch reality TV, to make the inane on-screen comments bearable I pretend that everyone taking part is high and it becomes much more entertaining (the best one for that is Project Runway ... it becomes so much more worthwhile). In these literary scenarios, I imagine that the authors were postmodern geniuses ahead of their time and the whole thing ends up rather bracing.

The final twist is alright. It's not original. It was done much better in one of the better-known Agatha Christie novels. But, to respectfully disagree with Pretty Sinister, I think it's explained here in a perfectly satisfactory manner. One note of caution: if you get hold of the copy I'm working from -- that in the picture -- and if you want to treat this as a whodunit, don't read the blurb! It's two lines long, and manages to reveal both the identity of Lady Robinson's killer and the clue that condemns them!

I bought In Peril of His Life because it was the cheapest full-length [sic] Cole book that I could get my hands on -- and I'm not about to rush out to buy another, more expensive one. But all in all, my view hasn't changed. I'm staying open minded for the time being.
Posted by A Sign of the Crimes at 14:15