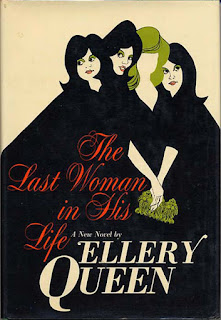 Death on the Cherwell (1935) by Mavis Doriel Hay. A whodunit published in the same year as Sayers’ Gaudy Night and, like that novel, set in a fictional Oxford college for women. But unlike Gaudy Night, Death on the Cherwell might as well be set in a boarding school, and is riddled with every cliche that Sayers tried to fight. It’s cruel to compare a minor name to a titan, but given the timing, comparisons are inevitable, and Hay comes out of them much worse.

Deep Water (1957) by Patricia Highsmith. A loveless marriage in a small town provides the backdrop to an utterly chilling, sophisticated thriller with every ingredient that makes Highsmith the foremost voice in 1950s American disillusion. I have no idea why this fantastic novel is not better known.

The Last Woman in His Life (1970) by Ellery Queen. Extremely disappointing novel that is offensive both in terms of its content and its quality. Apparently this one was ghostwritten.

'Inside Story' (1993) by Colin Dexter. I genuinely — and unpopularly — think that Inspector Morse is at his best in short stories. This might have something to do with the author not trying so hard to write, or to plot. You’ve probably guessed the set-up from the title: a contained narrative holds the clues to the surrounding mystery. Recommended.

The Golden Age of Murder (2015) by Martin Edwards. A majestic history of crime fiction in its heyday, and essential reading for fans and scholars of the genre.