The Breakdown by B.A. Paris 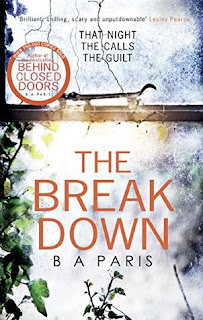 A couple of months ago, Sophie Hannah wrote a piece for The Guardian describing her ‘top ten twists in fiction’. I was slightly embarrassed to have only read a couple of the books on the list, and, because I trust Sophie’s judgment implicitly, I immediately went out and bought all the books on the list that I hadn’t read. One of these was Behind Closed Doors (2016), the debut thriller of former financier and teacher B.A. Paris, who is English but based in France. It was that book that I opened up and devoured in one go. Quite simply, I couldn’t put it down.

Alan and I were on holiday, and when we had to go out for a pre-arranged dinner date, I got quite tetchy because I wanted to keep reading. I even cried out, apparently: ’This narrator’s husband has just taken her out to dinner and she nearly died! So I can’t leave the room!’ After a very nice, very tipsy dinner date, we stumbled back to the suite and made straight for the bedroom — where I picked up B.A. Paris where I’d left off.

A few days later, I took to Twitter to extol this stunning debut in all its glory, and to my absolute delight discovered that there was another book by B.A. Paris out, also in paperback. So I ordered it, and exactly one week after reading Behind Closed Doors, I read The Breakdown (2017) in 1.5 days. As with the previous novel, I couldn’t put it down. I neglected a conference paper and arrived late to a dress rehearsal because of it.

The plot involves Cass, a woman aged 34 (for which, read: 44 but the author has an eye on film producers), who lives an apparently perfect life. She has a perfect job, a perfect husband, and a perfect hierarchy of friends. But one night, driving home from a party in a storm, she passes a woman whose car has broken down. Although she feels guilt for doing nothing at the time, she forgets about it until the woman’s mutilated corpse is discovered in the same place. Cass is driven mad with guilt and grief, and things are not helped by the fact that she keeps forgetting things. Little things at first — her credit card in a supermarket, the car keys — and then bigger things — where she’s parked, how to operate the coffee machine — and they all build to a sinister crescendo. Cass begins to suspect that she is suffering from early onset dementia.

The novel rattles along at a breakneck pace. In almost every chapter, Cass seems to forget something more and more important, and something more and more terrible happens.  One of the publishers' tag-lines is fantastic: If you can't trust yourself, who can you trust? Even in moments when I suspected the author’s heart wasn’t in it — the sections that were clearly written in after the bulk — I turned the pages desperate to know what would happen next. Paris writes cinematically: she presents us with prose that doesn’t feel like prose, but hooks us in exactly the same way as a sexy, suspenseful, big-bucks movie.

Unfortunately, there are also some cons to the writing that aren’t evidenced in Behind Closed Doors. Some arcs aren’t resolved, especially the subplot involving Cass’s attractive workmate, John, which Paris builds up and then abandons, and there are some irksome typos such as ‘expresso’ and ‘money is no option’. This time around, though still gripped, I did think about the quality of the writing which means that, subconsciously, I was slowing down as a reader. The Breakdown is one of those fantastic novels that makes me want to write fiction; Behind Closed Doors was one of those fantastic novels that made me forget I want to write and just revel in the action of reading.

There’s also a bit of a psychological plot hole towards the end, which I understand is necessary as the final twist is revealed. The way the truth comes out feels a little artificial and stage managed. It would probably work on film, but it wouldn’t happen in real life. Of course, this doesn’t matter at all, because it’s still immensely entertaining. The problem, I think, is that Paris is clearly becoming one of those writers who produces a book a year; she has a new one out in 2018 called Bring Me Back (someone likes the letter B!). As such, as with G.D.H. and M. Cole, whom I reviewed last week, the writing is a bit hasty. I would prefer to read a new Paris which has been extensively thought through and edited every two years. But I don’t count for much, and this is the age old issue of supply and demand.

That said, B.A. Paris is clearly a major new voice in domestic suspense, and as a writer I don’t think we can blame her for any of the shortcomings brought about by publishers’ demands. I still recommend The Breakdown without hesitation, and fully intend to pre-order Bring Me Back.
Posted by A Sign of the Crimes at 11:20