A Spot of Folly by Ruth Rendell 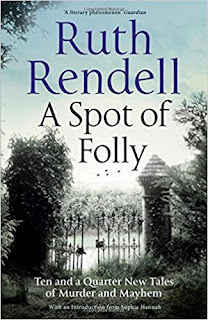 October 2017 sees the publication of a brand new book by Ruth Rendell, tantalisingly subtitled ‘Ten and a Quarter New Tales of Murder and Mayhem.’  The collection is introduced by one of Rendell’s biggest fans, Sophie Hannah, who is clearly influenced in her own work by Rendell at her peak. It includes previously uncollected short stories by this unquestioned titan of the genre.

When the news of Baroness Rendell’s death broke in 2015, I was working an evening job as a Sandwich Artist™ in order to pay for the un-funded writing-up year of my PhD. I switched off Twitter and put down my phone with a trembling hand. My manager, who was two years younger than me, rotated his baseball cap and asked, ‘What’s up?’

There followed a mini-lecture from me on Rendell’s contribution to the modern crime novel, and an angry advancement of customers who were not quite convinced that sandwich artistry should take its time. I didn’t stay long in that job.

The ‘quarter’ of a tale is perhaps unfairly described. It opens the volume and it’s very good. Originally published in the Telegraph, ‘Never Sleep in Bed Facing a Mirror’ is three lines long – the length of a joke – but contains a whole, complex story in those very few words. In her introduction, Hannah compares it favourably to Hemmingway’s ‘For sale: baby shoes, never worn.’ But it’s more than that: it’s a genre story in three lines, which is kind of incredible.

The other stories, dated from 1974 to 2006, showcase Rendell at her best and her worst. In different ways, each tale collected in A Spot of Folly is quintessentially Rendellian. She always creates extremely plausible characters that we can understand and believe in without particularly liking, and makes brutal actions the natural next step in their thought processes. That is so dark, so pessimistic, and so insightful that it’s terrifying. She has a beautiful grasp of the English language and a healthy scepticism towards the myth of the happy family. People emerge as grim, selfish, and always flawed.

Many of the protagonists are successful married men who are utter douches, and who tend to get their come-uppance. A big theme in this book is marriage, which for Rendell is tied to money and ‘[t]he cumbersome and frightening machinery of the law which keeps many ill-matched couples together.’ Another theme is the compulsion to lie. Every page is clever, suspenseful, and twisty.

I murdered Brenda Goring for what I suppose is the most unusual of motives.

You won’t believe this, but last Monday I tried to kill my wife.

Honestly, Hedda treats me the way some men treat their wives.

No nation had ever perfected a weapon and not used it.

the awful irony that runs through [events] like a sharp, glittering thread.

There are stories written as Barbara Vine, including the weirdest, least interesting one, ‘In the Time of His Prosperity’, and there is a ghost story, ‘The Haunting of Shawley Rectory’, which reminds me (don’t tell Rendell’s ghost) of Agatha Christie’s ‘In A Glass Darkly’, in that it’s actually a psychological thriller in disguise as a ghost story.

There is also a late novella, ‘The Thief’ (2006) which is a character study of Polly, a compulsive liar and thief who takes and destroys things from people who displease her. We follow Polly from childhood to adulthood, as she tries – and inevitably fails – to pursue normal relationships. It ends with her spectacular downfall. I think ‘The Thief’ would make a great film. It showcases Rendell’s razor-sharp skill for plotting (even if she did claim never to plan a piece of writing. I don’t believe her). But it also showcases Rendell’s decline as a prosist: the writing is not pithy or shocking, but sadly repetitive.

In most of the stories collected here, there is a twist that you see coming a mile off, and just as you’re patting yourself on the back for outsmarting the author, there’s a second, more devastating twist that knocks you for six. The final story, ‘Trebuchet’ (1985), is altogether different, and is an absolute gem. It has another intriguing opening line – ‘This is the most important thing in life, she thought on waking – yet we never talk about it’ – and slowly, inevitably, it becomes clear that this story is about nuclear war.

Inevitably, there’s not much cohesion in A Spot of Folly, because the publishers have collected what they could – but they’ve done a great job of arranging the stories in a striking and memorable order. This collection is ultimately satisfying in that it gives you the roundest possible view of Rendell as a writer – brilliant but flawed, inconsistent, profoundly misanthropic, and twistier than a motorway in Wales. An intoxicating helter skelter of a read.