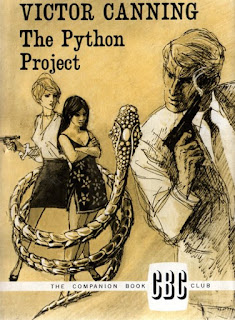 Death of an Airman (1935) by Christopher St John Spring. Murder in an amateur flying club. I don't know why I love this novel so much. It's not massively well-written and the killer is easy to spot, but there is some sheer fun and benevolence in the writing that makes it one of my favourite of all golden age mysteries.

Murder in Mesopotamia (1936) by Agatha Christie. A marvellous outing for Hercule Poirot, who finds himself among archaeologists with more buried secrets than the civilisations they're uncovering. Suspend your disbelief -- especially when it comes to the solution -- and enjoy this mystery with the perfect balance of dark psychology and light fun.

The Python Project (1967) by Victor Canning. A predictably unworldly, testosterone-filled, forensically heterosexual secret service outing for P.I./semi-spy Rex Carver. Suspicious foreign officials abound. It's not my thing, but is the best of the series.

The Ice Princess (2003) by Camilla Läckberg. This debut novel from 'Sweden's Agatha Christie' took some markets by storm. I have no idea why because there's nothing very exciting about it, and I'm kind of irked on Agatha Christie's behalf.

Hardball (2009) by Sara Paretsky. Reliable Chicago atmosphere in the thirteenth V.I. Warshawski novel. This time, our hero has to dig into her father's past to solve a complicated, long-running mystery. If you like Paretsky, Hardball won't disappoint.