The Taxidermist's Daughter by Kate Mosse 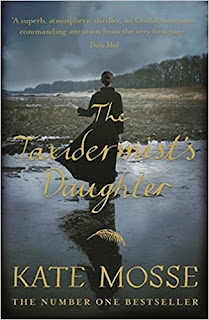 For 2018, I made about a hundred resolutions. One week in, and I’ve broken nearly all of them, but decided that the first week was a blip and that, next week, I will magically stick to a demanding pattern for self-improvement. One of the resolutions which I broke a few days ago was the decision to read a chapter for pleasure every night in bed.

My mistake here was picking up Kate Mosse’s splendid gothic murder story, The Taxidermist’s Daughter (2014).  For one thing, her chapters are incredibly short – there are 49, plus a prologue and an epilogue – in around 400 pages. So, obviously, I thought, ‘three or four chapters for this one.’ Then I started reading, and before long it had become, ‘just twelve or thirteen chapters … just a couple of hundred pages…’ The writing is gripping and the atmosphere compulsive.

The Taxidermist’s Daughter concerns Connie Gifford, a 22 year-old taxidermist’s daughter (shocking, right?) who is a skilled taxidermist herself, in an isolated house in Sussex in 1912. Except it’s not really 1912 – Mosse uses the year as the nebulous olden days, where rich people were benevolent, their fathers were corrupt, and each plucky servant knew her or his place and apologised for saying ‘heck’. Despite this, the novel builds up so much atmosphere and suspense that the clichés don’t matter. Slowly, warily, we feel a huge amount of sympathy for Connie and her friends from a range of social classes.

Connie has lost a huge chunk of her history: ‘the vanished years’ account for all her experiences up to the age of twelve but, recently, she’s been having flashbacks. Small scenes, they grow longer and more intense as the narrative progresses. At Blackthorn House, she cares for her widowed father, who has fallen victim to alcoholism, powerless to stop his past skill and precision from fading away.

One day, a body washes up at the foot of the estate: a beautiful woman with coppery hair. Connie sees incisions in the skin and knows that the woman has been strangled with fishing wire. Helped by a handsome stranger, Harry, who also provides a bulk of the POV, Connie and her maid inform the authorities – but the death is recorded as an accident. Meanwhile, both Connie’s and Harry’s fathers go missing.

Before long, it becomes clear that a serial killer is stalking the quiet rural area. Clear to the reader, who accesses the murderer’s thoughts, but not to anyone else. As the crimes become more dramatic, connections to an asylum and to the craft of taxidermy become explicit. Since the stormy weather is such a huge part of The Taxidermist’s Daughter, I did wonder if the time-setting – April 1912, the month the Titanic sank – was significant. However, no reference is made to that disaster, nor to the great social changes it has come to emblematize.

Mosse’s writing style reminds me of the stuff we studied at school and university. There’s something off-putting about it at first. Not a word is out of place, not a device is misapplied, but it’s so perfect that it almost feels sterile. Like, this is correct writing. Writing to be admired, not to be read. However, this feeling only lingered briefly, and after the prologue I was no mentally writing essays on Mosse’s prose; I was supping it.

So compelling is the prologue that, by the time we get to Chapter 1 and read this opening paragraph, it doesn’t feel overwritten:

Connie looked down at the scalpel in her hand. Quicksilver-thin blade, ivory handle. To the untrained eye, it looked like a stiletto. In other houses, it would be mistaken for a paring knife for vegetables or fruit.
Not flesh.

Like all good historical novelists, Mosse does her research and knows when and how to deviate from strict authenticity in the service of a good narrative. I appreciated the historical details, although I found them jarring in places. Whole passages seem to exist only to remind us that the author has researched the period. Take this, for example, when Connie gets a flashback to her time on a train as a girl:

They bought a lunch basket at one of the stations along the line. Connie could remember how greasy the chicken leg was between her fingers. Some cold beef too, and a little bread and butter. Remembered laughing and playing word games like ‘Cupid’s Coming’ and ‘Taboo’. It was a dull day, she remembered that too. The guard came to light the lamps in their carriage.

Such a paragraph could serve to show us the sensory intensity with which Connie’s memories are returning. But it doesn’t. It just chucks a load of details at us. Mosse is far from the worst culprit in this sense – and at least the passage is elegant. Too many historical novelists open each chapter with a handy list of things they’ve Googled. Mosse doesn’t do that, but in such moments as this, I didn’t feel wholly transported into the world of 2012 – or, more importantly, into the mind of Connie Gifford.

There aren’t twists and turns or shocks in Mosse’s novel – that’s not her stock in trade (although she does pull a sweet trick in the epilogue, which made me smile). There is, instead, a slow burn. The climax comes with gathering inevitability, as Mosse describes the storm clouds taking hold over the marshes, getting ready to reap historic levels of havoc. The final confrontation between goodies and baddies results in a neatly messy watery resolution.

If you want to escape into a moody and thought-provoking landscape, I’d certainly recommend The Taxidermist’s Daughter. Escape is the key word here; get lost in Mosse’s captivating prose and try not to§ think about the problems. I can picture this story as a BBC miniseries; one of those period pieces that capitalises on the nostalgia and manages to make the whole thing boring. So if it does get filmed -- and I have no idea if anything's in the pipeline -- I'd still recommend reading the book.
I only have one caveat: don’t pick it up if you have anywhere to be in the next five hours.
Posted by A Sign of the Crimes at 16:46