Agatha Raisin and the Wellspring of Death by M.C. Beaton 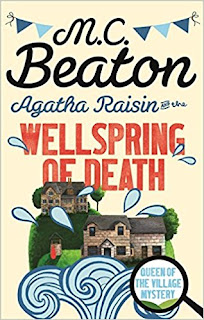 In 2014, I co-organised a conference in London: Queens of Crime, which focused on crime fiction and women. An astonishing number of delegates were middle-aged men, and they tended to tow a similar line: Agatha Christie was the Queen of Crime, PD James was just about acceptable, and Jessica Fletcher was a saint. On the first day, one gent -- a friend whose scholarly work I like and respect, but with whom I disagree on a couple of key points -- made a joke about M.C. Beaton, author of the Agatha Raisin mysteries, 'which are, of course, a waste of paper.' The room erupted with approval.

For the remainder of the conference, the idea that Beaton or Raisin could be considered crime queens, or even worthy of comment, became a running joke. An awful lot of energy was expelled on not giving these books the time of day.

I was a little confused. As I stated at the time, I didn't have a problem with the Agatha Raisin books; I quite liked them. There are a lot and I haven't read them all. I have also never tried Beaton's other series, Hamish Macbeth, or her romances written under the name Marion Chesney -- so, clearly, this series isn't engraved upon my heart, but it's okay. True, the books are not brilliantly written (okay, they are badly written), but these people were the kind who insisted that Agatha Christie just wrote puzzles, that literary quality was the last thing worth noting. So why all the hate? It was a mystery.

After checking Google to make sure that Beaton was not in fact a member of Britain First, I decided to just accept that lots of people didn't like the books, but that I wasn't one of them. After all, as an academic I'm used to being the only person in the room defending genre fiction of any kind, let alone a specific author. The hate continued at subsequent events; marvellous events with brilliant scholars, nearly all of whom I disagreed with on at least this one point.

When Sky announced an Agatha Raisin television pilot, and then a whole series, I was delighted. I came to the books through the radio adaptations with Penelope Keith, which change the tone considerably, so I wasn't surprised or disappointed to find the whole thing softened for TV. The other day, it was announced that Agatha Raisin would return for a second series. To honour this exciting news, I decided to review one of the books, and picked up an unread one at random from my bookshelf: Agatha Raisin and the Wellspring of Death (1998). Then, my eye fell on a publicity quote emblazoned on the back cover:


Agatha is like Miss Marple with a drinking problem, a pack-a-day habit and major man lust. In fact, I think she could be living my dream life (Entertainment Weekly).

And, just like that, all was clear. The hostility to the Agatha Raisin books has nothing to do with slap-dash writing. It's hostility towards Agatha Raisin herself. As an overweight, chain-smoking drinker solving twee English village mysteries, and actually taking the name Agatha (her maiden name is 'Styles', btw), she is desecrating the image of Miss Marple. Now, in my opinion, Miss Marple is a horrible person -- a great, loveable character, but an unkind person who uses gentility as a facade. That's my opinion and it's not a popular one. People like their older women detectives to be grandmotherly.

I, on the other hand, love Agatha Raisin. In the opening pages of The Wellspring of Death, she is lighting up her fifth cigarette of the morning when an uninvited houseguest asks her to put out her cigarette:


'Tough,' said Agatha. 'This is my house and my cigarette. What do you want?'

'Don't you know you are killing yourself?'

Agatha looked at her cigarette and then at Mrs Darry.  'As long as I am killing myself, I am not killing you. Out with it. What do you want?'

Trust me, this is exactly how most smokers want to talk to helpful friends. So it's delightful to read about a fictional superhero who actually says the words.  Raisin, a retired PR manager, has moved to the Cotswolds for a slower pace of life. But she doesn't fit in and the locals have a nasty habit of bumping each other off when she's around. This is the seventh book in the series, so she has mellowed a little, but the city rudeness is still there.

However, as each book progresses, we learn that Agatha is in fact the most humane person in the village. She is naturally kind, while the polite and proper locals are cruel and out for themselves. At one point, a furious Agatha lets rip at the parish council, telling them: 'You're always like this, murder or no murder -- nasty, carping, vicious and bitchy.'

The plot here isn't really important, because the books are much of a muchness.  It all starts when the village next to Agatha's catches the eye of a high-falluting water company, which is planning to destroy the village spring for corporate ends. With hostility from the villagers brewing, a bored Agatha signs up as the company's PR spokesperson, but as soon as she has delivered her maiden polemic she stumbles over a corpse.

Agatha is reluctant to investigate, because she is busy with the PR job and her latest sexual conquest. Sleeping with a man half her age means she feels she has to pay more attention to her physical appearance than usual, and to shield herself from increasingly bitter village gossip. The relationship doesn't work out, as we know from the start that it won't. Meanwhile, Agatha's will-they-won't-they friend Colonel James Lacey flits in and out, getting jealous and saying nothing.

The whole tone is a bit smug and right-of-centre. Most village mysteries are, because most villages are. This is a world where the murderer can wrong-foot the detective by calling them 'a liberal', presumably the worst insult imaginable. Agatha herself is a bit right wing. There is a frankly hilarious description of evil left-wing environmental activists, clearly written by someone who has never met a left-wing environmental activist.

But underneath everything, as stated, the lead character is sympathetic and humane. She can register distaste and hurl insults (my favourite one from the radio is 'your imagination is as garish as your lipstick') but she understands that even bad people don't deserve to die. When the plot demands, she grows emotional. The first thing that puts her off her toy boy is when, upon discovering a second corpse, he decides to call the papers -- to make sure it's reported in a way that reflects his company well -- before calling the police. Agatha is outraged, and channels her energies appropriately.

The writing style is simple and straightforward. The author's mind seems always to be on other things, and she seems to be rushing to type 'The End.' The book was probably written in less time than it takes to read, and it took me one afternoon. But it does what it needs to do: it entertains, inoffensively.