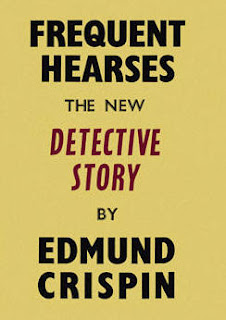 I love Edmund Crispin (aka Bruce Montgomery) and have loved him since I read Love Lies Bleeding in my school library at a tender age. I loved that book so much that I made a deal with the librarian -- I slipped her some money for wine and she marked the book as 'lost'. It was a mystery why it was in the library at all; certainly nobody had checked it out in over twenty years. Slowly, with the internet in its infancy and golden age revivals a good few years off, I pieced together a collection of Crispin's nine crime novels (I only got the short story collections recently), and decided to ration them out over my lifetime. I haven't read a Crispin for ages, so I picked one at random, and dug in. The one I picked was Frequent Hearses (1950).

I'm sorry to say that novel showcases Crispin and his brilliant donnish detective, Gervase Fen, at their weakest. The opening is glorious: a young actress, known professionally as Gloria Scott (surely a Sherlock Holmes reference), sits in a taxi, making her way through Piccadilly. When the car reaches Waterloo bridge, she alights. She walks to the edge of the bridge, and jumps to her death. A clear suicide -- but why? The young woman had just obtained her dream role in movies.

Meanwhile, Fen has been called to a film studio to advise on a new biopic of Alexander Pope. He learns of Gloria's death and sets out to investigate. Before long, there is a murder... and then another one...

The puzzle element is more pronounced than in some other books, but it is also less well integrated than anything of Crispin's I've ever read. In fact, when the solution to the mystery is revealed, it feels very much like a Sherlock Holmes story updated to fit the mid-twentieth century. I get the impression that this is an idea that should have remained firmly in a notebook; a nice and ingenious story, not fabulously realised. It should have been developed into more of a homage to the genre's heritage.

The prose is wonderfully overblown, especially when Crispin sets a scene, and it's deliciously pithy in places. For example, I love the initial description of David Crane as 'a young, thick-set man, going prematurely bald, of a type that emanates social uncertainty like ectoplasm.' The pith has its down side, however, especially when Crispin introduces working class types and women. I have not noticed this problem to any great degree in my other reading of the same author.

While I would recommend Crispin to nearly every reader, I would not recommend starting with Frequent Hearses. It is dated in all the wrong ways, and is a snivelling shadow of the author's rapier wit at its best.
Posted by A Sign of the Crimes at 16:10