Behind the Screen by the Detection Club 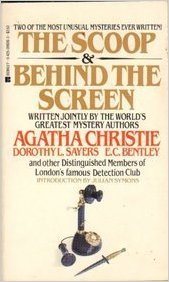 BBC Radio 4 Extra has just finished a rather exciting serial rebroadcast. The production in question, Behind the Screen, is an abridgement of an eccentric novella co-written by members of the Detection Club in 1930, and I thought this was the perfect opportunity to revisit the original.

The novella (not a novel, as it's only 70 pages long) was first published as a six-part serial in The Listener, at the same time as it was broadcast over the radio. The round-robin project was a deliberate fundraiser, followed by many other efforts of a similar ilk, most notably The Floating Admiral (1931). A much longer, and better-known, book, The Floating Admiral would feature several crime-writing heavyweights, each contributing a chapter towards an un-plotted murder mystery, and nearly all of them preferring their own solutions in sealed envelopes, to be published at the end of the book.

Behind the Screen, later published with a similar effort called The Scoop, was written differently. The six contributors planned in advance what would happen when, and who would write what. The result is a more conclusive, but sadly also a more conventional, mystery, reading very much like the minor effort of a middling star of the age.

The Ellises are having a quiet evening in, with a few guests, the housekeeper Mrs Hulk, and their hated lodger, Paul Dudden.  Young Amy Ellis is with her fiancé, a medical student  called Wilfred, who senses a sinister atmosphere in the house. His thoughts take shape when he discovers, behind a Japanese screen, 'Dudden dead [...] Dead Dudden!' Moreover, Dudden has been killed up to three times. Soon, the local police inspector arrives and buggers everything up, so it falls to Wilfred to get to the bottom of things.

The contributors to Behind the Screen are, in order: Hugh Walpole, Agatha Christie, Dorothy L. Sayers, Anthony Berkeley, E.C. Bentley, and Ronald Knox.

All six writers keep the tone light, though some are lighter than others. Walpole's opening is inevitably melodramatic, and Christie's second chapter, introducing a few more characters including one of her own trademark busybody spinster men (these remind me so much of so many of her fans), makes the whole thing readable. Sayers and Berkeley are reliable, but neither is in their element. Bentley is demonstrably outside of his comfort zone. One of the reasons it took me so long to read Trent's Last Case -- a pioneering masterpiece of golden age crime -- was an aversion to his chapter in Behind the Screen.  In the final chapter, Knox trips over himself a little in an attempt to explain the complicated solution whilst retaining his trademark moralistic levity.

Back in 1930, each part was broadcast on the BBC, with the author reading her or his own chapter. This was quite a common feature of the genre at the time, and has to do with a number of things: a now-alien celebrity culture, crime fiction's quest for legitimacy, and the national spirit of game-playing that accompanied the genre's success. Fun fact: the first person to play Miss Marple was in fact Agatha Christie, who read out the character's monologue, 'Miss Marple Tells a Story', on the radio in 1934. Not for the first time, I'm dreadfully irritated that no one has recordings of the older BBC broadcasts.

The serial in The Listener was published as a competition: readers were given key questions and invited to send in their ideas by post. There were 170 entries, and Miss E.M. Jones of Birmingham won the top prize of ten guineas. In my edition (a standard 1980s American paperback), all the competition-y bits appear as appendices.

A while ago now, HarperCollins reissued The Floating Admiral, resetting the text of an American reprint inside the first edition cover, with a new retro dust-jacket. It did very well, and was followed up with a string of other round-robin reissues. Most of them were published with 'forewords' by Agatha Christie, because she didn't actually take part in many, and this enabled her name to be huge on the dust-jackets (these 'forewords' would take the form of a newspaper column, a private letter, a shopping list ... well, not quite, but more or less). The project culminated in the production of a new round-robin novel, The Sinking Admiral, by some of the Detection Club's current crop. I must get a copy. If you've read it, what did you think?

Why there hasn't been a reissue of Behind the Screen is something of a mystery. I wonder if it's because The Scoop, with which it has traditionally been published, and to which Christie also contributed, is decidedly politically incorrect in places. However, that hasn't stopped revivalists before. Maybe it's because neither novel is massively brilliant -- and, certainly, both lack the fun spontaneity, the sense of maliciously tying the next writer up in knots, that makes The Floating Admiral so unique. But if not being very good was a bar to big-scale publication, our bookshelves would be considerably barer.
Posted by A Sign of the Crimes at 13:37