The Comedy About a Bank Robbery by Mischief Theatre 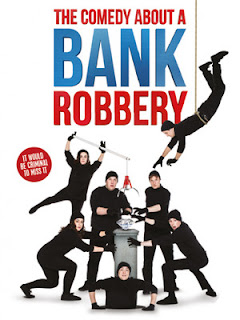 On Saturday, Alan and I had a marvellous day in the West End, seeing not one but two shows, and enjoying the Lumiere festival in between.

The first play was saw was The Comedy About a Bank Robbery at the Criterion Theatre – and it was hysterically funny. This is not the kind of thing I usually review on here, but I wanted to share all the splendour, and, besides, a bank robbery is a crime, so it’s all good, right?

The play has been running since 2016 and is one of three productions by Mischief Theatre currently playing in the West End. The group, formed by a handful of LAMDA graduates, is probably best-known for The Play That Goes Wrong (an absolute masterpiece of physical comedy, which it’s impossible not to enjoy). The conceit behind The Play That Goes Wrong is that we are watching amateur actors butcher a murder mystery; predictably enough, everything goes wrong … and it’s wonderful. The same people did Peter Pan Goes Wrong for the BBC in 2016, and that too was hilarious. When they tweaked the format a little for A Christmas Carol Goes Wrong, broadcast on BBC One on Christmas Day last year, the result was diabolical – quite possibly the biggest disappointment since Cadburys announced they were improving their recipe. So I was slightly wary about going to see The Comedy About A Bank Robbery. What if, somewhere along the line, Mischief Theatre had lost its touch?

Well, I needn’t have bothered. The Comedy About a Bank Robbery does not tweak the successful formula. Instead, it ventures into different territory. It is straightforward old-school farce, and it’s very well done. The story concerns an escape from prison in 1950s America, and the planned robbery of massive diamond from a secret bank vault. At the centre of all this is a romantic triangle involving one of the prisoners, the bank manager’s daughter, and a small-time grafter.

None of the jokes are new (that should be ‘is new’, I think, but it doesn’t feel right).  A running gag concerns the banker, Robin Freeboys, and one of the criminals assuming his identity in order to go robbing three boys – which owes a debt to the ‘don’t call me Shirley’ school of laughs. At one point, the gag gets tweaked with the introduction of a certain Roger Freeboys. There’s also a marvellous routine in which our young hero – the petty grafter – pretends to be the same man, his girlfriend’s father, while she mimes visual clues – reminiscent of a scene in in Fawlty Towers in which Basil Fawlty tries to tell the hapless Polly which horse she’s supposed to have backed. The authors of this production – Henry Lewis, Henry Shields, and Jonathan Sayer, who were among the original cast but are now off doing improv – have mixed their comic clichés in just the right doses. From two minutes in until long after the final curtain, the audience was in paroxysms of mirth.

One thing I really admire about Mischief Theatre productions is the way they use the whole stage, including the lighting box. This production has actors crawling up a vent over the front row of the audience’s heads. It also has a technically impressive and visually hilarious scene which takes place at a ninety-degree angle (sadly, I can’t find any images of this scene online). There’s also a great deal of singing, which neither of us was expecting and which helped keep the spirit light and kitschy.

At the performance we saw, one of the parts was played by an understudy (which means that the ensemble cast must have mixed around quite a few roles, as everyone plays two or three people). Honestly, I wouldn’t have known. We saw a very high-profile musical in the evening, also with an understudy, who has been understudying the role for two years, and that production didn’t run entirely smoothly. And, while Mischief Theatre doesn’t do dance numbers, it does a hell of a lot of physical comedy and choreographed stunts as well as intricate wordplay. So it needs good understudies, and it has them.

I would absolutely recommend going to see The Comedy about a Bank Robbery if you’re able to get to the West End, or if it ends up on tour, as I’m positive it will.
Posted by A Sign of the Crimes at 17:37