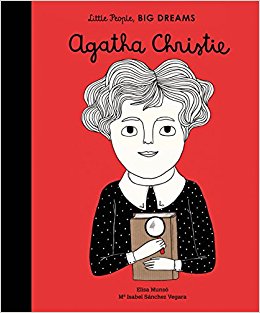 This is the 99th review to appear on A Sign of the Crimes, if we count each batch of mini-reviews as 5. So the next post will be a bit special. There is a small clue as to the subject of Review #100 in today's post.

As a member of an Agatha Christie group on Facebook (okay, as a member of about ten), I have heard a lot about this quirky book for children. Part of the 'Little People, Big Dreams' series, Agatha Christie was first published in Spanish, with words by Isabel Sanchez Vegara and drawings by Elisa Munso, in 2017. The series has a great and noble aim of introducing strong female role models for 5 to 8 year olds. Other figures considered in the series include Frida Kahlo, Maya Angelou, Amelia Earhart, Audrey Hepburn, Rosa Parks, Marie Curie, and Coco Chanel.

The story is a very basic, thirty-two page one. It begins with the young Agatha teaching herself to read and making up stories. It continues through her VAD service during the First World War and her acquisition of knowledge about poisons. Then, we see Agatha starting to write, encounter her books, plays, and characters, and learn about their extraordinarily broad appeal. The easy-to-follow words are accompanied by entertaining illustrations, mostly black and white but with nice splashes of colour.

I was impressed by the inclusion of small, little known details. For instance, when Agatha starts writing, there is a manuscript beside her titled 'The House of Dreams'; that was one of her first short stories, written well before 1920 but revised and published in 1926. The book also has her inventing Miss Marple whilst holidaying in Egypt and writing Death on the Nile. Of course, this didn't happen; the first Marple story was published in 1928 (and its provenance provides a second clue to Review #100...). However, as John Curran revealed in his publication of the author's notebooks, Death on the Nile was originally going to be a Marple novel. So that's kind of cool. 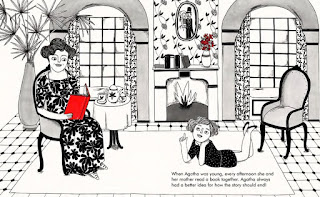 It's good that this series does not shy away from subjects that are traditionally sugar-coated children; war, revolution, and murder, for instance. If you read my review of Kenneth Illington's Conjuror's Alibi you'll know that I'm all for introducing young people to a few basic realities as early as possible. The mystery of who accidentally ate the pink teddy's strawberry cupcake just won't cut the mustard. However, while I think Agatha Christie is one of the greatest people in the world, ever -- naturally -- I am a little confused as to why she's in this series. I would have thought the rags to riches story of JK Rowling a little more interesting, because, amazing as Agatha Christie is, she never faced massive hostility in the way that Angelou, Kahlo, and others did. I suppose there is the significant fact that JK isn't dead.

And of course I'm delighted to see the Queen of Crime being introduced as a feminist role model in a world where role models are so sorely lacking.
Posted by A Sign of the Crimes at 17:07