The Madman of Bergerac by Georges Simenon 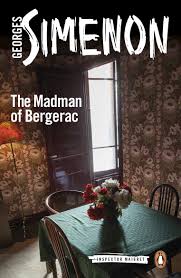 A short while ago, I did some last-minute cover teaching for a university course on crime fiction. Glancing through the syllabus, I noticed a good selection of novels, but one entry particularly caught my eye. ‘Any Agatha Christie novel’. Eyes widening in horror, I huffed my disapproval. They’re not all the same! Agatha Christie was the finest crime novelist of all time, each of her best books a masterpiece on its own merits. And so on. I sternly put the class right on this point, and that was that.

Now, this week, I’m guest lecturing on another crime fiction programme at a different university. After glancing at the handbook, I had a chat with the module convenor and found myself asking, ‘So, they’ve read The Murder of Roger Ackroyd and a Georges Simenon so far?’ The convenor replied in the affirmative, politely naming the Simenon, The Madman of Bergerac (1932), in the process. In that moment, I realised that I was as bad a hypocrite as anyone in the House of Commons (okay, my hypocrisy doesn’t actually kill people, but it was pretty devastating). I was thinking of Simenon’s entire output – famously written in haste – as homogeneous; every title as interchangeable.

I’ve never quite gotten on with Simenon. People say he has a commanding psychological intensity; that his prose is laconic and insightful. I’ve always thought it felt poorly-plotted and unlovingly executed. I’ve read about five over the years, and not enjoyed any before. Nonetheless, determined to check my prejudice, I gave The Madman of Bergerac (first published in French as Les trois morts de Bergerac) a read. And I decided to examine it with fresh, objective eyes.

It was enjoyable enough. I liked Maigret very much, with his quirky subterfuges and bloody-minded curiosity. He has a very clever trick in interrogations of

jumping from one subject to another and suddenly talking about things that have nothing to do with the conversation. […] The other person, fearing a trap, tries to guess at an ulterior motive when there isn’t one.

The idea is that they slowly grow frustrated and bored, and then answer the real questions truthfully by rote. And I liked the long-suffering, hen-pecking Madame Maigret, too. Going by the titles of later books in the series, she seems to feature a lot, which makes me happy. Their dynamic reminds me a tiny, tiny bit of Rumpole and Hilda, but Frenchified.

The novel begins with Maigret travelling on a train, determined to get a break after a particularly unpleasant case. But when a passenger jumps from the moving train not far off the railway station, Maigret’s curiosity is peaked to such an extent that he also jumps. Then he (Maigret) is shot. He wakes up in hospital and finds himself under official suspicion of being ‘the Madman of Bergerac’, a homicidal maniac terrorising young women in that seemingly respectable commune.

The locals remain suspicious of Maigret, because he comes from outside of Bergerac, and they cannot face the idea that the killer could be an insider. After all, as one character puts it, ‘[o]ne would understand if it had happened in Paris, where vice is endemic … but here!’  But all is not as it seems: one of the first things Maigret notices is a complete lack of prostitution. So, of course, he asks the Chief Prosecutor, ‘what do you do around here for love?’, because he believes – correctly, as it turns out – that it’s impossible to have a place, however serene, without a sex industry.

Simenon’s Bergerac, then, is no St Mary’s Mead, and while the locals are busy suspecting Maigret, he, in his turn, casts a suspicious eye on citizens in positions of power. He only starts to make progress in his case when he asks a pretty obvious question: ‘suppose [the police] stopped looking for a madman? Suppose they simply looked for a logical explanation of the chain of events?’

There are some fabulous turns of phrases that give us lovely insights into character and circumstance. For example, when Maigret exhales a lungful of cigar smoke, it rises above his head ‘in the shape of a halo’; a ‘very petty bourgeois’ woman wears ‘clothes […] made by a local seamstress, or, if they did come from a good fashion house, she didn’t know how to wear them.’

One thing that was particularly – umm – noticeable was the overuse! of! exclamation! marks! I’m not sure if this is the translator’s initiative, because I don’t remember it from other Simenon titles, but I found it highly distracting. There are about eight on each page! I also didn’t care much for Simenon’s plotting. I’ve heard that he just dashed these off with a pipe and a bottle, and perhaps that shows. There’s an element of throwing things into a pot and moulding them together. But it’s fine. I did find the story interesting. I am, however, glad it wasn’t longer.

The novel is, in all, a nice take-down of rural respectability. I enjoyed it more than I expected to, but I’ll have forgotten all about it in a month.