You Will Know Me by Megan Abbott 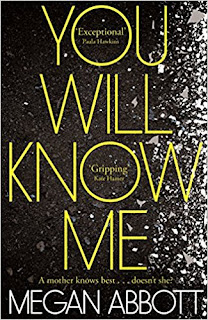 Back in 2014, I co-hosted a conference in London with the title Queens of Crime. As part of the festivities, we asked speakers to name their nominations for the current Queen of Crime. The laurels fell, mostly, to P.D. James, Ruth Rendell, and Val McDermid. Asked to name an upcoming Queen of Crime, speakers delivered an almost unanimous verdict: the American writer, Megan Abbott. At that point, I was only familiar with the brilliantly cool The Song Is You. When I read You Will Know Me last year, I remembered what people had said in. London -- and realised that it was coming to pass.

You Will Know Me (2016) is a stunning novel which reflects its context with ruthless, unnerving precision. It's also absolutely the kind of book that should be filmed. Perhaps this is hyperbole, but I think a film of You Will Know Me could become a defining document of American life in the 2010s.

The book is told from the point of view of Katie Knox, whose life revolves around her fifteen year-old daughter, Devon. Devon is a gymnast who has been pushed, all her life, to pursue perfection. There's talk of a future in the Olympics, and the community couldn't be more obsessed with her. But Devon -- whose foot, damaged in childhood, Katie cruelly dubs 'Frankenfoot' -- is not pursuing any medal or trophy for herself. She's been told what she wants and been told to work for it. Her body flits and contorts throughout the book's pages; a twisted canvas on which her parents paint their dreams.

In the run-up to an all-important competition, a handsome boy is killed and Katie suddenly has to look both beyond her daughter and deeper into her mind. Meanwhile, Devon's overlooked brother steps into the spotlight... With every new turn, the novel's title becomes more and more sinister as Abbott explores what it means when we can't know the people we love.

From the very first paragraphs we know what this book is going to be about:


The vinyl banners rippled from the air vent, the restaurant roiling with parents, the bobbing of gymnast heads, music gushing from the weighty speakers keeled on the window ledges.

Slung around Devon's neck were three medals, two silver and one gold [...] 'I'm so proud of you, sweetie,' Katie whispered in her daughter's ear. 'You can do anything.'

And just like that, we know that the parent-child relationship will come under scrutiny. We know that Devon is a high achiever with no agency. We know there's something stirring in the 'rippled' celebrations, and something ready to break in the 'gushing', 'weighty', 'roiling' celebration. Megan Abbott doesn't waste a word. Her vocabulary is stark and cutting. She tends towards single-word sentences in You Will Know Me, or fragmented -- broken -- by -- dashes. Words are everywhere in this book -- words that deflect, words that mislead, words that hide truths, and words left unspoken.

Taken as a murder mystery, I can understand why You Will Know Me might seem a little ... lacklustre. But taken as a disturbing psychological thriller, it's both gripping and intense. It sticks with you long after you close the last, haunting page. It turns, spins, and contorts itself behind your eyes.
Posted by A Sign of the Crimes at 17:25