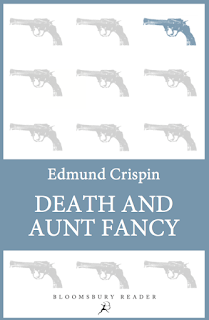 A delightful and very brief short story that is collected in Fen Country, 'Death and Aunt Fancy' (1953) is being issued to readers for free by Peters Fraser Dunlop on behalf of Edmund Crispin's estate. To read the story, simply sign up to their newsletter.

The story was first published in Colliers Magazine in 1953, and has been reproduced a few times since, perhaps because it's conveniently short. But it's also very good.

'Death and Aunt Fancy' is only four pages long and as a mystery it's satisfying without being challenging. A 'tubular' man in his mid-fifties, George Gotobed, visits his long-estranged aunt and her companion. Within minutes, his aunt has uttered some cryptic words and George departs, confused. Not long later, there's a murder...

Gervase Fen, the eccentric Oxford don whom I fell in love with as a boy, appears in a wonderful sketch, hearing the problem and solving it on the spot. I am so pleased that something is being done with Crispin's estate, and hoping that the BBC TV project by Mark Gatiss, which was supposed to happen in 2016, materialises one day. There was something magical and frustrating, as a teenager, in trying to gather together as many Crispin books as I could, because nobody had heard of him and only The Moving Toyshop was in print.

If you're new to Crispin, or to Fen, 'Death and Aunt Fancy' is a good -- free -- place to start. If you're an aficionado, or just a fan, I'd love to chat. My favourite Fen mystery is Love Lies Bleeding. What's yours?
Posted by A Sign of the Crimes at 13:22