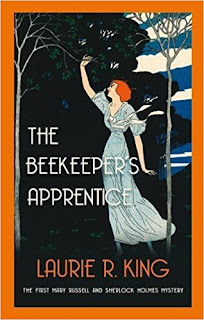 There’s a terrible vice I need to confess. It’s not quite as bad as judging a book by its cover, but in many ways, for me, at least, it’s worse. I’m a sucker for a pretty book and have the collecting bug. In addition, I’m a slow reader. Combined, these facts mean I tend to amass sometimes complete series of books before I get around to reading them. In short, if there is a set of books with covers that catch my eye, I’ll collect them incrementally from charity shops and, in the case of Alison and Busby books, The Works.

That’s how I amassed six or seven of Laurie R. King’s Sherlock Holmes and Mary Russell books. To be honest, I avoided reading them for years because, while the books themselves are indisputably gorgeous, the idea of Holmes in retirement meeting, then marrying, a fifteen year-old American didn’t really appeal. That was virtually all I knew about this series, beyond the fact that it has a good following. I also knew, of course, that King is a well-regarded American novelist and the creator of Kate Martinelli.

Then two things happened at once. One: I had a huge clear-out, getting rid of nearly 900 books that I won’t need again (this is hard, and being an academic I can always tell myself that I might want to write about Insubstantial Thriller XYZ or might need to teach Dull Classic ABC). Still, several beautiful sets of books got the boot: the highest profile casualty was Ellis Peters. I finally got around to reading from my near-complete set of attractively presented Cadfaels. If I need to make a snap judgement, I turn to page 85 and if I don’t end up on page 86 it hasn’t worked for me. I tried three Cadfaels and didn’t get on with them, so out went most of those. Laurie R. King survived this cull automatically, though. Anything Sherlock Holmes related stays, however bad – because I probably will write about it one day. But the series was on my radar again.

The second thing that happened was this: I read an essay on King’s novels in Crime Fiction as World Literature, a great new Bloomsbury book. The essay, by Theo D’haen, described the first novel, The Beekeeper's Apprentice (1994) and its interesting set up. King introduces the novel as herself, saying – in the traditional way – that she received a box full of (conveniently uncounted, as there was no telling how long the series would run) manuscripts from a woman who claimed to know Sherlock Holmes.

Then there is a ‘prelude’ from this Mary Russell in which she states:

I do not remember when I first realised that the flesh-and-blood Sherlock Holmes I knew so well was to the rest of the world merely a figment of an out-of-work medical doctor’s powerful imagination. What I do remember is how the realisation took my breath away […]

Watson’s stories, those feeble evocations of the compelling personality we both knew, have taken on a life of their own, and the living creature of Sherlock Holmes has become ethereal, dreamy. Fictional. […] And now, men and women are writing actual novels about Holmes, plucking him up and setting him down in bizarre situations, putting impossible words into his mouth, and obscuring the legend still further.

The very act of irreverence to Drs Doyle and Watson ironically reveals attention to the canon, its devices, and its characters, but also enough competence to avoid trying to emulate them.  All of this piqued my interest because it was very clear that King had done her research, and I thought I might as well give the first book a chance. So I did, and, while it hasn’t made a die-hard fan of me, I’m looking forward to reading more, and collecting the full set.

The story is this: in 1915, a young American woman, Mary Russell, is reading on the Sussex downs when she runs into an elderly – well, middle-aged – Sherlock Holmes. They immediately start banting like Benedick and Beatrice with very good A-levels and become friends.

It’s clear from the very beginning that Russell and Holmes are equals and I particularly like the way King doesn’t overstate Russell’s cleverness; she doesn’t chuck in obscure Latin references (well, hardly ever) or little demonstrations of superiority in the way that so many crime writers do when their hero is cleverer than they are. The characterisation is, like the character, assured and effortless, and we can’t help admiring and respecting Mary Russell. When she comes, three-quarters of the way through, to confess her dark and sordid secret, we are totally on her side.

I was also impressed with the handling of Holmes’s famous misogyny: King doesn’t milk it or paste over it as so many do. Instead, she shows him as a brilliant but flawed man who is mellowing with age.

Looking back, I think that the largest barrier to our association was Holmes himself, that inborn part of him that spoke the language of social customs, and particularly that portion of his make-up that saw women as some tribe of foreign and not-entirely-trustworthy exotics.

He works with her, she decides, because he sees her as ‘a lad’ (note: not ‘a boy’); that is, as an apprentice rather than as a woman. The fear of women that he has expressed has been a product of his social upbringing – unlike Doyle’s Holmes, King’s is a gentleman amateur – and part of his absolute focus on his work. It hasn’t been, as it is in Sherlock, a disengagement with sexuality, but rather a total ignorance of half the human race.

Russell goes off to university, but comes back to visit Holmes, and they end up getting involved in a transatlantic criminal case in… Wales. Naturally. From this, they end up in London, donning disguises and nearly getting blown up. Then they travel to Jerusalem – I’m not entirely sure why – and back to London, and Sussex (to actually get blown up) and Oxford, and a random ladies’ toilet where Holmes makes a personal discovery. Mycroft is involved, Watson is involved, Mrs Hudson is involved, even the long-dead Moriarty is involved. There’s a war on but we don’t hear much about it.

As a plot summary, this sounds ridiculous and nonsensical, but King’s eminently readable style just about makes it work. At any rate, I found myself turning the pages at a steady rate and not really questioning anything, except the sojourn in Jerusalem. Most of it makes sense at the time. I did spot the villain, purely because there aren’t many characters, but that really isn’t the point.

This is one of those novels where plot and social commentary are hard to separate. The solution is just part of the great narrative message which is about the pursuit of gender equity. It has a 1990s Spice Girls-level feminism vibe about it, which is obviously philosophically limited but great fun to read. By the end, I was relieved that Holmes and Russell hadn’t yet tied the knot. I am at least now convinced that when they do marry (in Book 2, I think), it won’t be for conventional reasons, and while my Holmes would never behave in this manner, I don’t deny King hers.

All in all, I enjoyed The Beekeeper’s Apprentice. I think it could have been a bit shorter and a bit more streamlined, but in this book King achieves something rare. She does something original with an overused canon.