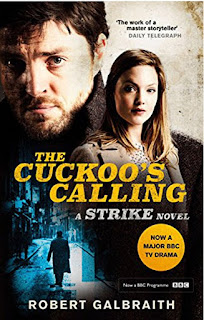 I have just caught up on tonight’s pilot episode of the new BBC 1 drama Strike, based on The Cuckoo’s Calling by Robert Galbraith. Adapted by Ben Richards and directed by Michael Keillor, it offers entertainment in a workmanlike way; thrills without frills.

When I read The Cuckoo’s Calling, praised by reviewers and commentators as some glorious revolution in crime writing, I was disappointed. The book was perfectly enjoyable, and easy to read – whatever name she’s writing under, the author knows how to make you turn the pages – but it didn’t do anything new. Strike wasn’t a new detective at all but collection of clichés – divorced (or disengaged, I think), war-wounded, alcoholic, disillusioned, and grubby, but with an innate sense of justice. Never been done before, right? – and the narrative attitude to women struck me as shockingly old-school. Things do improve by the third and best book, Career of Evil. So I found it interesting that Strike’s beautiful title sequence is resolutely retro. With (to me, anyway) faint hints of Ashes to Ashes and Life on Mars (neither of which I’ve seen beyond the title sequences), it’s as anti-Sherlock as it can be.

This opening episode introduces us to Strike, whom I’ve outlined above. He’s played by Tom Burke, who is, of course, younger and sexier than the books’ heavy, washed-out character. He gives a performance that is at once enigmatic and hypnotic: you want to find out more about the character, even as you want to un-pop his collar and switch off the bloody irritating background music. Burke's characterisation helps create a sense of bleak timelessness that defines the BBC Strike’s London. Everything is still a bit too clean for my liking, and a dull colour-filter, old-school café scenes, and gloomy line-delivery with mostly hidden echoes of RADA doesn’t really equal social commentary or relevance. But I like the way that London in this programme is – like the traditional-but-contemporary story – both in and out of time.

We also meet Robin Ellacott, Strike’s new secretary, played by Holliday Grainger, whom I actually pictured when reading the books. Grainger brings an emotional range to the role which I’m sure will come in very useful in future episodes. In this episode, she’s underused – I’m referring both to the character and to the actor – which is a shame. But I think the idea is for her to balance things out as they get darker and more fraught. At the moment, we’re still meeting Strike and learning about his world.

Strike is asked to investigate the death of a supermodel who fell to her death from her luxury apartment. Adapting to the complexities of the case is easier for him than dealing with his own disintegrated romance, the shadows of a rock-star father, and a frosty working friendship with Robin. The case leads him to meet glamorous people in clean settings and grubby people in dark settings. Every room has a colour theme: usually blue.

There is no memorable dialogue and when it tries to be memorable it’s just unfortunate. For instance:

When you start a new case, it’s like looking into an aquarium […] You put your face up against the glass […] and watch the fish…

There’s nothing really wrong with this line; it just feels like some script consultant spent ages reaching around for the perfect metaphor and settled on it. We see Strike, having showered, without his prosthetic leg in a scene that, apparently, shocked many tweeters. The BBC has already started issuing rather tasteless statements about the exciting special effects employed in creating this scene, and the whole thing has left me with a rather bitter taste – it’s not simply there to give us a rounded view of the detective and his struggles. Given the way this scene was built up, both in the press and in the episode, with allusive shots and verbal references, there’s an undeniable element, if not of voyeurism, then of ‘look how clever and edgy we’re being.’ The pilot ends with the discovery of an inevitable second corpse.

Edit: As an able-bodied person I don't have the authority to comment on this extensively, and certainly not to have the last word. Please see these tweets from Tina, a Twitter friend who had a different opinion on Strike's injury and its presentation:

I'd missed the pre-BBC discussions on his disability, so as a disabled person it was good to see a lead character who just happened to be
— Tina Hodgkinson (@TinaWalksLondon) August 28, 2017

disabled, will go back + see what was said about it, it made for pleasant Sunday night viewing but not rushing out to read the books
— Tina Hodgkinson (@TinaWalksLondon) August 28, 2017

Not a huge deal happens in this opening episode beyond a decent set-up, which ensures that most viewers will tune in tomorrow. I found it entertaining and watchable, but nothing to rave about. I think the idea is to replicate what Raymond Chandler achieved with his Philip Marlowe novels: presenting a run-down, noble man who is too good for the decade he lives and works in. It executes itself in a way that I imagine Daily Mail readers will consider bang up-to-date and hard-hitting. At the same time, it challenges nothing. I don’t doubt that Strike will be a huge success, and I think it’s pretty good. I’ll be sure to keep watching, but I’m not about to rush out to pre-order DVDs and Cormoran Strike T-shirts.

Tl;dr it 'strikes' a balance between okay and very good (see what I did there?!). I guess that means it's good.
Posted by A Sign of the Crimes at 23:06