Death at the President's Lodging by Michael Innes 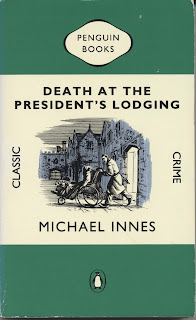 When I was twelve, I started running out of Agatha Christie books to read. This meant two things: first, I would have to ration the remaining dozen or so, and, second, in order to ration them I would have to find other great writers to enjoy. To date, I’ve not found anyone who can give me the same thing Christie does, although I was perfectly happy juggling Ngaio Marsh for plot and Iris Murdoch for psychology in my late teens.

Anyway, I consulted the lovely Book People. This was the olden days of 2002 so the internet was not very glorious and I ordered some books from a glossy brochure. It was a set of five ‘classic crime’ books by Penguin, sampling five classic writers: Margery Allingham, G.K. Chesterton, Edmund Crispin, Josephine Tey, and Michael Innes. I read Allingham’s The Tiger in the Smoke and thought it was okay. Likewise, Tey’s The Franchise Affair (rereading a few years ago, I updated my verdict to AWESOME). I was already a Crispin fan so found The Moving Toyshop predictably wonderful. Chesterton’s The Innocence of Father Brown disappointed me, which the Father Brown stories continue to do. There was only one book in the set that I couldn’t read: Death at the President’s Lodging (1936) by Michael Innes.

Time and again, I tried. But it was so dull. The prose was so smug and referential and the characters were so uninteresting that I couldn’t get into it. This was particularly unfortunate because, thinking from the title that it was a political thriller, I’d elected to do a school project on the book! For years I thought that Michael Innes was only good for one thing: teaching me how to skim the pages of a book and talk about it without having read it.

Then, at 19, in a particularly dark time of my life, I picked up at random an old copy of Hare Sitting Up, a very different Innes novel, and I loved it. I couldn’t believe that this was the same writer. It never occurred that I was simply too young to understand Death at the President’s Lodging the first time.

A few weeks ago, a helpful friend informed me that I read boring books. This immediately made me think of Death at the President’s Lodging, so I sought it out and opened it up. And I read. And read. And read.

This book was Innes’s debut, and the pilot for his detective John Appleby’s five-decade career. It’s a witty and sophisticated whodunit that positively revels in its artificiality. The set-up is this: the president of a university college has been found murdered, and around his body are piles of human bones.  It’s not quite a locked-room mystery, but rather a locked-community one because the president’s lodgings are in a sequestered part of the college, only accessible to a select few dons. I say ‘locked community’ rather than ‘closed community’ because Innes does a fantastic job of showcasing academia in ridiculous and resolute isolation from the real world.

It’s this isolation, this absolute silliness of the community about which Innes writes, that makes his solution work. On the face of it, the final chapter is ludicrous beyond parody, but the author sets it up so well, and with such unreality, that it makes perfect sense. Innes was, of course, a pseudonym for James Innes Mackintosh (J.I.M.) Stewart (1906-1994), a widely-travelled Oxford don.

There are seven suspects in this mystery, and each man is implicated by an embarrassment of clues. It’s up to Inspector Appleby to sift the real from the contrived:

[I]n the network of physical circumscriptions implicitly pointing […] to so-and-so there was contrivance in a literary tradition deriving from all the progeny of Sherlock Holmes, while in the fantasy of the bones there was something of the incongruous tradition of the ‘shocker.’ Somewhere in the case, it seemed, there was a mind thinking in terms both of inference and of the macabre. … A mind, one might say, thinking in terms of Edgar Allan Poe. Poe, come to think of it, was a present intellectual fashion, and St Anthony’s was an intellectual place. …

I love it when crime fiction does this. What I didn’t love so much was the smugness of Appleby’s many literary references, or the fact that beyond occasionally quoting someone learned, he has no discernible personality. From what I have read, Future Appleby never gets decently characterised, although he does go on in later books to acquire a wife, a daughter, a promotion, and a retirement package.

Death at the President’s Lodging has a bit of a first-novel-vibe to it, but, that said, it’s a bloody good debut.
Posted by A Sign of the Crimes at 14:25