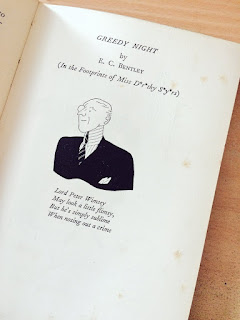 A curio today, and one of the shortest texts I've reviewed so far. 'Greedy Night' (1936) is a short send-up of Dorothy L. Sayers' Lord Peter Wimsey, which appears in Parody Party, a fascinating volume edited by Leonard Russell and printed on what looks like watermarked writing paper by Hutchinson. Russell's 'introductory note' seeks to trivialise the book as the result of a weekend parlour game, and makes what I think is a wonderful point.

Responding to what he sees as the inevitable criticism that 'post-war novelists and people haven't sufficiently distinctive styles to admit of the better sort of parody', Russell points out that parody as a 'critical' tool serves to draw out these distinctive styles that are otherwise invisible in a contemporary world. It is, of course, heartbreaking to realise that people living in what we now call the interwar period described themselves as living 'post-war', and even more so to reflect that the unique and specific prose styles we so readily associate with those years are themselves defined by the passing of one war and the anticipation of another.

Before going any further, a note of warning: this post contains spoilers. Personally, I find it difficult to discuss the joys of detective fiction without blabbing about the solutions, because often the story of the crime itself is essential to whatever contribution the text is making. In a similar vein, I don't mind a jot if I read a book already knowing whodunit. For me, it really isn't a case of 'animated algebra.' But I know that many people disagree, so accept this spoiler warning, the only intimation!

Edmund Clerihew Bentley (1875-1956), as if you needed to know, wrote Trent's Last Case (1913), a comic country house mystery that many have credited with spawning the British murder mystery as a distinct literary genre. He also invented the appropriately-named clerihew, a form of verse that haunts me from my student days, when our poetry tutor regaled us with an assortment of his own miniature masterpieces, from which I have yet to recover.

In this intriguing send-up of Dorothy L. Sayers, Bentley contributes a clerihew of his own which appears both in the text and ahead of it, accompanied by an image attributed to Bentley's famous son ('Nicolas Bentley drew the pictures', runs the credit line). I quote the clerihew in full because it reveals the story's charms and its limitations:

May look a little flimsy,

When nosing out a crime.

Charming because it's a clerihew by E. Clerihew himself, and it's clearly done in a spirit of great affection. Limited precisely because it's clearly done in a spirit of great affection, and, technically, it's not very good. These four lines alone tell us that there's not going to be any serrated criticism in the story -- and that's fine, of course. By its very nature, parody tells us something about contemporary reception and interpretation, even if this has been carefully controlled. I'm looking forward to reading the chapter parodying Hugh Walpole by Francis Iles (aka Anthony Berkeley, aka A.B. Cox), who was not well known for softening the blows to his peers.

The opening scene has Bunter, Wimsey's faithful manservant, bringing his master breakfast in bed. When they discuss the unfortunate substances that His Lordship imbibed the previous night, and when Bunter casually lets drop that he has 'always taken an interest in the technical study of medieval calligraphy', it's clear that the character here is early Wimsey, not late Wimsey. This is the character Sayers described as a cross between 'Fred Astaire and Bertie Wooster' and not the introspective married feminist that Wimsey was about to become at the time of the story's publication.

Another figure soon arrives on the scene: no less a personage than the Bishop of Glastonbury. A mysterious death has taken place, and His Grace invites His Lordship to investigate. The investigation takes Wimsey into an academic setting -- of course -- where everyone starts to talk about eating. There is a curious exchange between Wimsey and a young admirer called Mitchell:


Wimsey laughed. 'I must go. But do you and your friends really read the chronicles of my misspent life, then?'

'Do we read them?' cried Mr Mitchell. 'I should say we do read them! We eat them!'

There is a nod here to the grand generic tradition of acknowledging the artificial status of the narrative; to Sherlock Holmes' many remarks about the people who read his adventures in The Strand. And the reference to 'her' takes it one step further.

The words 'we eat them' become relevant, too.  At the end of the book, Wimsey opens up the corpse's mouth -- God knows what the corpse is still doing there -- and removes several pages of a book. That book is Strong Poison by Dorothy L. Sayers (with a handy footnote explaining the publisher, and just falling short of 'available in all good bookshops'). Wimsey explains:


Strong Poison! [...] Too strong indeed for poor Dermot. Such is the magic of that incisive, compelling style that even the very printed word is saturated with the essence of what it imparts. Others eat her works in a figurative sense only; Dermot began to eat this one in truth and in fact and so rushed, all unknowing, on his doom.

Do we detect here a josh in the direction of Sayers, who sought to elevate the intellectual standing of a detective novel and was about to give it up all together? Is the hyperbole mere sycophancy or is it a ruthless critique of what many people still consider pretension? What I really want to know is -- what did Dorothy L. Sayers think of this story? I'm sure she will have read it.

There are also some hints here -- as there are in Trent and much of the fiction it inspired -- of what we now call postmodernism. I think that we can expect a po-mo crime revival one of these days. But I'm rambling, and in discussions of this nature, that's not a good thing.