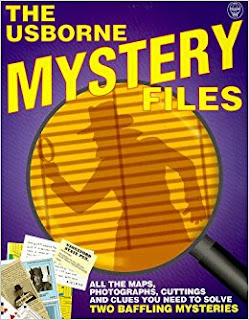 Sorry for the lack of entries to this blog! Due to illness, I’ve found myself with no energy for anything – literally anything – but work lately. What I thought I’d do today is talk to you about something that I first experienced at the age of nine and have returned to every so often since then.

Recently, I got interested in Dennis Wheatley’s ‘Murder Dossiers’, often described as the first interactive novels, and I bought all four (Murder in Miami, the Mallinsay Massacre and so on), some of which I’ll go into in future posts. Essentially, these are collections of documents rather than prose stories, in that they provide all the physical clues needed to solve the mystery and give you the answer in a sealed envelope. They were wildly popular for about fifteen minutes and the two authors (Wheatley and J.G. Links) were decommissioned as soon as sales figures fell. One gets the impression that the publishers were almost relieved, since each dossier was costly and time-consuming to produce.

Anyway, looking through these old ‘dossiers’ reminded me of something that I’m always being reminded of; a kind of game along the same lines that I got in 1999 when it came out. The story begins when I was a strange child who had just grown out of the Spice Girls and into Agatha Christie. Every other Saturday, our grandparents would take my siblings and me to Norwich (the biggest, most vibrant city we could imagine), and we’d go round an amazing bookshop where we would be allowed one present, the value of which totalled up to ten pounds.

One week, I got a complete collection of Poirot short stories (£9.99), one week I got an ‘archaeology set’ (a block of sand which you brushed away at to unearth plastic ‘Egyptian’ treasures, some of which you could paint, £7.50), and one week, I got The Usborne Mystery Files (1999; £8.99). There are two stories here, all told through paper documents – case files and evidence – and the solutions revealed in sealed envelopes. 28-year-old Jamie loves this almost as much as 8-year-old Jamie did. 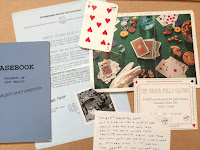 The first case is called Murder Map Mystery. The story is woven together in the casebook of the lead investigator, with entertaining annotations in handwriting. A booklet of suspect profiles allows us to go through the testimonies and match descriptions (ignoring the fact that many of the suspects are clearly the same model in different wigs). We end up in the seedy world of gangsters, casinos, ciphers, and half-eaten biscuits.

The second case is my favourite, Thief in the Night, set in a wonderfully pretentious art world. A booklet of interviews reveals some absolutely hilarious suspects, including an artist who will only go out in public wearing a tiger head mask and a woman whose interview begins: 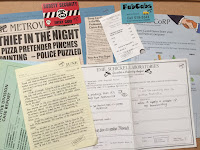 The reader (player?) is given handwriting samples to compare against a forged diary entry. This is how I learnt which letters of the alphabet are hardest to disguise in handwriting. There’s also a wonderful taxi company business card, emblazoned with the slogan FabCabs: We may not be the best, but we're the cheapest! and a fabulous leaflet from the art exhibition at the centre of the case.

Just look at these wonderful pictures of Objects from the Artist’s Garbage. The whole thing is so much fun to go through. 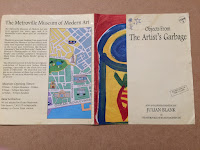 Every now and then, I find this game and go through the documents. There’s one thing missing from mine – a newspaper used in Case 1, which I lost about 15 years ago but can still remember clearly. It bears a big picture of a gangster and his wife on holiday in Hawaii, but the real clue is in a small notice on the other side of the page. I don’t know where the newspaper clue went, but my best guess is that someone used it to line the guinea pigs’ hutch. Oh, well! 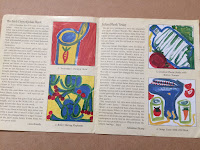 The other day, I had the bright idea of googling the Usborne Mystery Files, partly in the hopes of buying another copy in order to recover the missing clue, and partly because I wanted to see if there were any more stories in the same series. I’m not above children’s entertainment. You can imagine my surprise when I found only a few copies of the game (and no more in the series) online and retailing at anything from £100 to £400.

So you might not want to rush out and buy a copy of your own, but I hope this review has let you in on some of the great fun you can have as a crime-minded child whose best friends are books.