A Toast to Tomorrow by Manning Coles 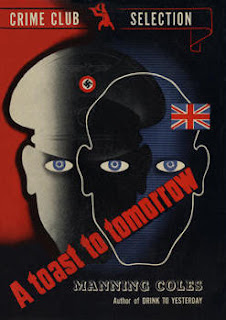 Today’s blog post is a bit of a departure, as I dip an amateur toe into the pool of spy fiction. Generally, I’m not a discerning critic: I can’t stand Ian Fleming, never got into Eric Ambler (but plan to have another go soon… watch this space), and unapologetically enjoy Agatha Christie’s contributions to the genre. This post covers one of the seminal texts in the emergence of the spy thriller as a distinctly British genre.

‘Manning Coles’ was a pseudonym for two writers, Adelaide (AKO) Manning (1891-1959) and Cyril Coles (1899-1965). They were friends and neighbours, and much of their writing is based on Cyril Coles’ experience in the British secret service. Their first novel featuring the British teacher and con man turned secret agent, Tommy Hambledon, was A Drink to Yesterday, published in 1940. Like Mr Coles, who pretended to be older than he was in order to enlist during the First World War, Hambledon is incredibly patriotic, believing that ‘if a country is worth living in, it’s worth fighting for’, and the Manning Coles novels are interesting because they were started as apparent propaganda during the Second World War, continuing apace — and slowly shedding their realism — into the 1960s, even after the first partner’s death.

A Toast to Tomorrow (1941) is the American title of the second Hambledon novel, which appeared in the UK as Pray Silence. As well as Hambledon and other recurring characters, it contains the then contemporary, and very real, figures of Adolf Hitler among several high-profile fascists. As with most of the books on this blog, I read it because it had been sitting uncaressed on my bookshelf for years. And let's be honest: just looking at the cover, it's clearly about the rise of fascism, which is terrifyingly relevant in this day and age.

The blurb of this one — my edition is the US first — makes it clear that Manning Coles is supposed to be ushering in a new era of spy fiction:

It is as different from the old spy stories as a Hitchcock movie is from silent pictures […] We would like you to forget any ideas you may have about spy stories and approach this as a novel with humor, three-dimensional characters, realistic motivation and breathtaking suspense.

What the blurb doesn’t mention is  the plot, so here it is. We encounter a man in a hospital in Germany in 1918 who has no idea who he is. The nurses name him Hans Lehmann and he starts to wonder what he could possibly have done to lead to such severe memory loss. He is worried that he might have been a murderer — the nurses say he is too nice for this to be true, but he reassures them that ‘some criminals are delightful people.’ They agree, though, that he has probably killed, because he is of military age.

In the next decade or so, Lehmann runs around Germany trying to find his family, and soon encounters a lonely old woman in a small town who is willing to act as a surrogate aunt, without bringing him any closer to his true identity. Scouring military bases, he somehow ends up meeting Hitler and Goebbels, is impressed by their rhetoric, and joins the fledgling Nazi party. He soon rises through the ranks and, in the 1930s, becomes the Nazi chief of police.

While Lehmann conscientiously tows the party line, his ‘aunt’ Ludmilla often puts Hitler and others gently in their places. For instance, when Hitler goes of on one about all the glorious things ‘the Party’ will do when it comes to power, Ludmilla interrupts ‘innocently’ with a question about how they’re going to afford it. Hitler’s attitude to Ludmilla also sews a seed of doubt into Lehmann’s hero-worship, because the leader comes across as a clear misogynist who can’t deviate from the script. After the first family meeting, Klaus and Ludmilla share the most appropriate response to the far-right during peacetime: they ‘looked at each other and burst out laughing.’

Anyway, the Nazis gain power and Lehmann assumes his senior role. Goebbels doesn’t like him, but Hitler does, so he stays in place. In his role, he sends a load of innocent people to concentration camps, and tries not to think about it.  Then he has a revelation: he’s got his memory back, just on the eve of the Second World War.

And guess what? He’s not German at all, but an English government spy called Tommy Hambledon! He later remembers that he was planning to ‘retire to the country and grow pigs’ but such plans are put on hold. Automatically, he switches allegiance and works to undermine the German government from within. This is very carefully explained as perfectly natural. Lehmann/Hambledon has not changed his character at all, the authors assure us, just his allegiance. He’s still intensely patriotic but now, because he’s discovered that he’s English, he’s on the right side. He proceeds to get a bunch of senior Nazis sent to concentration camps which is, I think, supposed to be jolly funny or something. A hundred pages or so are devoted to the various capers surrounding a government going to war, rounding up foreigners, while the head of police is himself a foreign spy.

I find it incredibly telling that Hambledon’s unthinking and violent patriotism is never problematised — the fact that the authors are perfectly happy to make it clear that his allegiance, like our implied judgment of it, is based purely on an accident of birth. When I say Hambledon doesn’t change his character, I mean it: his alarming attitude towards Jewish people remains in place, and the novel takes a weird kind of position of abhorring fascism whilst revelling in anti-semitism. Perhaps this is one of the pitfalls of a war retrospective written when the war was just getting started.

A Toast To Tomorrow is an interesting piece of amateur propaganda, and an intriguing spy thriller. I know that Manning and Coles have been credited with inventing the genre in post-war Britain with its focus on authentic psychological excitement over and above fast-paced codes, ciphers, and women. And I can see how this makes sense in relation to A Toast for Tomorrow. The novel’s flaws are plain for all to see — they’re of their time but not excusable, and the book survives on its own merits as a self-conscious study in allegiance and jingoism.
Posted by A Sign of the Crimes at 10:57