The Daughter of Time by Josephine Tey 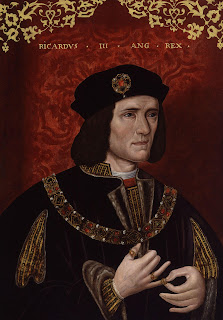 The Daughter of Time (1951) is one of the most famous detective novels of the twentieth century and it remains the volume for which Josephine Tey is best known. In 1990, the Crime Writers’ Association voted it the number one top crime novel of all time, and it was in the news again recently when the body of its subject, Richard III, was recovered from beneath a car park in Leicester. I know I wasn’t the first nor the last person to have their understanding of that man completely reconfigured by reading this novel.

I first read The Daughter of Time as a sixth-former. It wasn’t my first Tey but it was the first one that made an impression. The central conceit is bizarre enough to be iconic. Inspector Alan Grant, confined to a hospital bed, is looking for something to pass the time. He ends up applying his keen policeman’s mind to a problem surrounding the historical figure of Richard III. Suspecting that Richard might not be the monster we all know him as, Grant uncovers a web of lies and propaganda, configuring Richard as a victim of political machinations and
even absolving him of responsibility for the infamous case of the princes in the tower.

A couple of weeks ago, I was delighted to hear that a serialised and apparently unabridged reading of the whole novel was being aired on BBC Radio 4 Extra. If you’re based in the UK, you can still listen to all episodes here. This review is based on listening to the reading, rather than an a close rereading of the text – although I have, of course, read it a few times.

One thing, beyond the obvious, that makes the story so special is Grant himself. He’s a great and understated detective; a poetry loving policemen before they were ten-a-penny, he also lives with a constant mental crisis, splitting his mind into distinct personalities and haunted by the fact that he will never be a manly man. Nearly all of Grant’s cases spring from his own fascination with the victim. He develops an unhealthy and uncanny obsession with the deceased – usually a beautiful man – and the case of Richard III is no different. Grant gets lost staring into the eyes of etchings and finds himself unable to reconcile such a hypnotic face with the horrible stories attached to it. That’s his starting point.

Treating the historical mystery as a contemporary psychological criminal investigation, Grant sees everything from a fresh angle, allowing his creator to gently satirise the naiveté of traditional historians, who unwittingly tow the line of archaic propaganda. There are frequent allusions to ‘the Sainted Moore’, referencing the authoritative but factually flawed writings of Thomas Moore. As one of Grant’s helpers, the excellent Marta Hallard states, with cutting diplomacy: ‘Perhaps when you’re grubbing about with tattered records, you don’t have time to learn about people. I don’t mean the people in records, but real-life people — flesh and blood’.

Of course, Grant can’t do everything by himself from a hospital bed. Not only would that be impractical in the pre-internet age, it would also be incredibly boring for the reader. One of his helpers is the actor Marta Hallard, whom Tey’s readers will already know, and another is an American student who develops a love of research purely by accident whilst helping him out. This student, Brent Carradine, provides our policeman with his fill of original documents found in the British Museum. He (Brent) is planning to write a book about Richard. When he asks if Grant would prefer to do the honours – since this is his case – Grant responds that he would never write a book. ‘It’s my considered opinion that too many books are written as it is’, he adds. And, glancing up for a moment from a detective novel that really pushes the boundaries of what a detective novel can do, the reader agrees.

There is an element of artifice in this novel, and I’m not just talking about the rather wonderful parodies of historical fiction in and out of which the author dips (Tey herself was, of course, also an historical novelist and playwright, under a second pseudonym, Gordon Daviot). No, the whole thing, the five century-long puzzle, must be tied up and resolved by the time Alan Grant gets out of hospital. And, of course, it is. When he emerges from hospital, having found out the truth, Grant makes perhaps my favourite comment in all of Tey’s work: ‘How small and queer the world looks viewed the right way up.’

Grant’s/Tey’s version of the Richard III is not quite the story we have now, but it is closer to it than the traditional Shakespearean line. It is frankly remarkable that a genre novel has been so influential. It’s not my favourite crime novel – it’s not even my favourite Tey – but the fact that it exists, and in such an entertaining and accessible form, is brilliant.
Posted by A Sign of the Crimes at 16:50