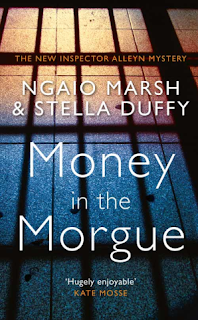 Tea for Three (1939) by Margery Vosper. Isn't the internet wonderful? The very day I published my review of Murder on the Second Floor, mentioning Vosper's 8-page adaptation of an Agatha Christie short story, not one but two friends very kindly offered to send me a copy. I'm happy to report that this is a wonderful vignette, fully maintaining the spirit of Christie's 'Accident'.  I'd love to see a performance of Vosper's script as part of a larger entertainment event. It's fun and twisty and typical Agatha Christie.

'Lamb to the Slaughter' (1953) by Roald Dahl. If you know any of Dahl's adult short stories, you probably know this one. An exemplum of black comedy, it's the one about a woman who whacks her husband over the head with a frozen leg of lamb. I didn't think of it as crime fiction until, last year, I found myself recommending it to one of my creative writing students who wanted to pen quirky crime. It's definitely useful for authors of crime, comedy, suspense, and psychological fiction to study. And it's bloody good fun to read.

The Secret Seven Short Story Collection (2007) by Enid Blyton. Not my cup of ginger beer.

Gallowglass (2018) by Middle Ground Theatre. Barbara Vine's (Ruth Rendell's) 1990 novel has been newly dramatised by Margaret May Hobbs for this touring production. I thoroughly enjoyed the show, which was largely down to the excellent, fabulously twisty and psychologically nuanced plot, centred on a kidnapping operation. The lead character, a typically Vinean troubled youth, is played flawlessly by Joe Eyre. The other actors vary in quality from outstanding (Paul Opacic) to frustrating, and I wasn't convinced about the direction. I also wasn't sure when it was supposed to be set, as we're in a pre-internet world of landlines and newspapers but the backdrops show contemporary billboards etc. If anything, seeing Gallowglass on stage made me long to read the book.

Money in the Morgue (2018) by Ngaio Marsh and Stella Duffy. There could be no better choice than Stella Duffy to complete Ngaio Marsh's unfinished Roderick Alleyn novel, and she doesn't disappoint.  It's a shockingly brilliant act of ventriloquism, and Duffy does a better Marsh than Marsh herself. Starting from a less-than-ideal premise (in a military hospital, some money goes missing), Duffy weaves an ingenious plot in entertaining style. The solution bamboozled me but it's totally fair. Alleyn is in fine form, and his adventures are peppered with theatrical allusions and society secrets. New Zealand itself is a living, breathing character, and the absent presence of the Second World War is felt with chilling immediacy. Money in the Morgue is a book to cherish and a masterpiece within its genre.
Posted by A Sign of the Crimes at 11:07