A Different Kind of Evil by Andrew Wilson 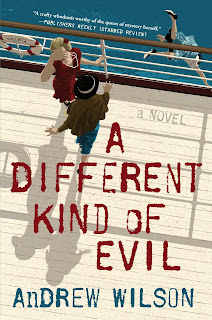 Last year, Andrew Wilson, biographer and author of The Lying Tongue, published his first crime novel featuring Agatha Christie as a central character, A Talent To Murder. He’s not the first to have fictionalised the author’s 1926 disappearance, and there have been some seriously zany explanations proposed. However, even the Doctor Who episode, which put the whole thing down to a giant alien wasp, stuck in familiar Christie territory — the wasp was disguised as a vicar and hanging out in a country house — so I was intrigued by Wilson’s decision to go ‘dark’ in his first Christie book. In A Talent for Murder, Christie is blackmailed by a truly evil man, and forced to commit a murder of her own… It all resolves, though, without a stain on our favourite author’s character, and the result is that she takes on a top secret role with Intelligence.

A Different Kind of Evil (2018) will be published in May. It is set a few months after the annus horribilis, with Agatha (as I shall now call her) struggling to write her next book and voyaging to Gran Canaria. She’s there at the bequest of Intelligence, to look into a mysterious death involving partial mummification. The trip really happened, although it was a straightforward holiday; she went with her secretary Carlo Fisher and her daughter Rosalind, who both appear in Wilson’s version, to get away from England in the aftermath of all the unpleasantness in December. However (back in the world of fiction), early on in the trip, Agatha witnesses a young woman jump off the SS Gelria to her watery grave. Why did she jump? And could this mystery somehow be connected to the partially-mummified corpse?

Agatha teams up with Mr Davison, who was also her mentor in the last book, and discovers that the case has a personal connection to him. As she digs deeper, she learns about a tangled web of unrequited passions, incest, and, and black magic. Agatha’s experience of poison helps her out more than a little, and she draws on her mother’s interest in the supernatural to enter an isolated gothic world.

The mystery itself is complex. I worked out about half of the solution, so I’m happy with that. There was one element which I wasn’t sure about; which I felt could have been explained a bit more, but overall it was a satisfying read. Wilson’s Agatha Christie is not the real Agatha Christie. She can’t be. For one thing, I doubt that the real writer would ever have gathered together the suspects and explained the solution to the case — she was painfully shy — and, much as it pains me to say, she was much too conservative to have had a gay best friend. However, that doesn’t matter.

Inevitably, I want to compare Wilson’s Agatha Christie to Josephine Tey in the books by Nicola Upson. Both women were extremely reticent and didn’t like talking about their private lives. As a result, we tend to create both of these people in whatever image suits us best: a popular one for Christie is the Kindly Grandmother. This is something Wilson does not descend to; he simply makes her a nice, shy person who can’t really offend anyone, and that’s smart. Upson does something similar with Tey, although her Josephine ends up so drastically unlike the real Elizabeth MacKintosh that one wonders why she didn’t just give her a new name. Wilson’s Agatha is grounded in research. Not only do her memories, experiences, and friends line up with history, but so too do her interests and attitudes. For instance, her childhood love of music and her tastes in drink (a cup of cream when other people drank alcohol, if you’re interested) are all woven into the characterisation.

I like the fact that Wilson is making Agatha’s shyness the impetus for investigation — because underneath shyness are two things: a cynicism that sees social life as a performance, and a desperate desire to get involved in the play. I understand that, Agatha Christie understood it, and Wilson gets it, too. It’s nice to be reunited some of the people we met in A Talent For Murder, and to get to know them a little better. There’s also an interesting mystery, with more than a few nods to stories and novels Christie would go on to write, including ‘The Man from the Sea’ and, most conspicuously, Death on the Nile. The literary style, the plotting, and the execution of ideas are not in Christie’s ballpark; this is a different kind of mystery.

The novel is, finally, eminently readable. It’s a page-turner. The prose isn’t sparkling but it does draw you in. I read A Different Kind of Evil in three 130-page-sittings, and look forward to the next one.

Source: Advance review copy from the author
Posted by A Sign of the Crimes at 16:41