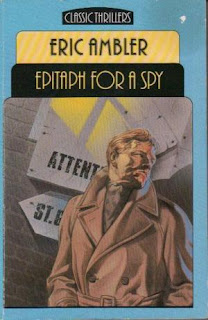 Gas Light (1938) by Patrick Hamilton. Describing itself as 'a Victorian thriller', Gas Light inspired the hugely successful Hitchcock film (which, amazingly, I haven't seen) and gave birth to the term 'gaslighting'. Until I read it, I didn't realise that the author also wrote the homoerotic psychological classic Rope. The play tells the extremely melodramatic story of a housebound wife in foggy London, who comes to believe that her husband is trying to drive her mad. The play is a hugely important precursor to the modern psychological thriller. However, even for a drama written 80 years ago, it feels slightly archaic in places; good, but more important than good.

Epitaph for a Spy (1938) by Eric Ambler. I'm incredibly impressed by my first taste of Eric Ambler. This early spy thriller, which is more of a detective story than later examples of the genre, stars a rather wonderful Hungarian immigrant, Josef Vadassy, who, taking his holiday snaps to be developed, discovers images of secret codes and weapons. Working with, but not really with, the French police, he stays in an hotel, knowing only that the enemy agent is among the other guests. The prose is fast-paced, funny, and, at times, beautiful. Although the culprit is fairly easy to spot, the denouement, on the rooftops of Toulon, is gripping.

Roseanna (1965) by Maj Sjöwall and Per Wahlöö. The first in the series from the couple who invented Nordic Noir. A beautiful American tourist winds up dead in Sweden (true life inspiration: Sjöwall observed Wahlöö eyeing up just such a woman, and resolved to kill her off in Chapter One). Out of their depth, the local police call in the troubled Martin Beck and his murder squad. Beck enters an intense and uncomfortable international investigation, uncovering sex crimes, persecution, and betrayal. A bleak and uncompromising story, Roseanna is a pioneering novel that has influenced most western crime writers since. Essential reading, still fresh and powerful today.

The Twelve Deaths of Christmas (1979) by Marian Babson. Last month, I was sorry to hear of Marian Babson's death in December, and reminded of the only book of hers I've read: the ridiculously titled The Twelve Deaths of Christmas. It's a diverting enough murder mystery, nothing more and nothing less. Set around an 'old-fashioned Christmas', the narrative perspective alternates rapidly and it's difficult to spot the killer. I haven't read it since I was eleven, but I remember very vividly a death scene on the London Underground. Babson herself was quite a character, who loved cats and never owned a television; if you have access to the CWA's Red Herrings, check out the tributes in the latest issue.

Beautiful Shadow: A Life of Patricia Highsmith (2003) by Andrew Wilson. Highsmith is the undisputed Queen of Suspense, an author we all want to know more about. Thankfully, Andrew Wilson's biography provides a detailed and nuanced account of her life and work. After reading this biography, I felt like I wanted to call Highsmith 'Pat', like I knew her in all her grubby, contradictory glory. It's not a happy story, but it's as compelling as anything she wrote.
Posted by A Sign of the Crimes at 16:31