Model for Murder by Peter Campion 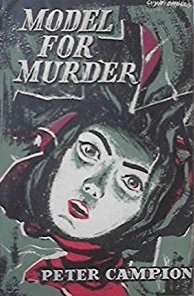 Today's review concerns Campion's Model For Murder (1955). To my mind, this novel bears all the hallmarks of something written under a pseudonym. The book, touted as 'Peter Campion's first published book [bearing] the unmistakable "feel" that it has been written by a master' was published at the exact same time as Campion's only other novel, Diamonds Worth a Death or Two. That in itself should raise suspicions: clearly the author had two manuscripts ready and, clearly, the publisher felt comfortable taking a chance and publishing two books at once.

There is no blurb on this, the only edition. It simply hypes up the fact that we're reading a debut, and there is a small biographical line: 'Peter Campion is a young New Zealander at present living in London.' Note that there is no reference here to Peter Campion's sex. It's also such a vague biography that it almost seems pointless. It reminds me of the noncommittal info about Robert Galbraith on the first edition of The Cuckoo's Calling. If the publishers were so keen to promote this exciting debut novelist, surely they'd tell us a bit about them? If the author was too retiring to offer biographical insights, it would have been perfectly acceptable to leave them out altogether. No, this one-line bio has the unmistakable whiff of a red herring.

The prose itself provides further evidence that Peter Campion is not Peter Campion. This is not evidence that could be admitted in court, but one of the central characters is called Peter Barrett. Out of all the fiction I've read in any genre, I've hardly ever known an author give their own first name to a central character unless they are making a specific point. The only exception I can think of is Ian Rankin who has created, I think, two rapist/murderers called Ian.

Edit: I'm grateful to Twitter user Andrea Mullaney (@Pandrea100) for pointing out that 'Peter Campion' could be an elision of Sayers' Peter Wimsey and Allingham's Albert Campion.

My initial thought was that Peter Campion must be a mask for a reputable 'literary' novelist branching out into genre fiction because the writing is unusually good. I do not believe for one second that this author had never written or published anything before Model for Murder. It's polished, pared down, and calculated prose. The plotting is less expert. The narrative style owes a lot to 1930s American crime fiction, and the plot is a very, very well-disguised take on Agatha Christie's Murder is Easy. As I read on, I revised this opinion: my best guess is that 'Peter Campion' worked in the movies.

The setting is London in 1955. A wonderfully ahead-of-its time prologue in the present tense (like a treatment, or screen directions?) shows us a bustling street. Some women stop outside a clothes shop and look in at the lifeless wooden mannequins. And then, one of the mannequins falls forward, smashing the glass so that only 'a jagged continent' remains in the window-frame.

They look at the dummy, at the wreckage of the chair [on which it had rested]. They see that the dummy's hair is matted and tangled. How did it get like that? You know, it almost looks like...

Campion abandons the present tense at this point and we fall back into more familiar territory. It's an ambitious novel which is in equal parts a straightforward whodunit (a handful of suspects might have caused the model's death) and social commentary (the police are keen to 'scapegoat' the IRA, as this is an 'approved' response to a mounting body-count). Our two intrepid policemen, Inspector Saunders and Peter Barrett have a tendency towards pith:


'Wonderful, isn't it, [...] the number of completely different stories you can get from one set of facts.'


He had the elaborate poise of a third-rate actor.

Campion does not waste the word-count in excess verbiage. There is a nice point in chapter seven, when a woman tries to fight the effect of sleeping pills -- it brings to mind that scene in The Lady Vanishes -- and, while a lesser writer would have spent pages and pages on the process, Campion does not. The whole routine is done in eight words: 'Walk and walk again. Coffee and more coffee.'

About half-way through, in the necessary let's-put-all-the-facts-in-order scene, Peter Barrett has a revelation, sitting in a cinema and not paying attention to the film. Despite the fact that he  is 'neither listening nor watching', the author describes the film in such intense and specific detail that I am convinced this, and not fashion houses or anything else, is familiar territory.

There is a final suitably tense showdown in an office suite at night time, and the murderer is revealed. I was not hugely impressed by the way it all resolved because for such an edgy-feeling novel, the complete absence of psychology feels rather limp. The murderer's motive is 'insanity' and the police/the author leave it at that.

Model For Murder is a short and easy read. Buy a copy for yourself -- they're super-cheap, even with dustjackets (question: would an unknown author have such a wide debut distribution...?) -- and do let me know if you have any theories on the author's true identity! Perhaps I'm barking up wrong tree. Perhaps I'm barking up something altogether different.
Posted by A Sign of the Crimes at 12:22