Night By Night by Jack Jordan 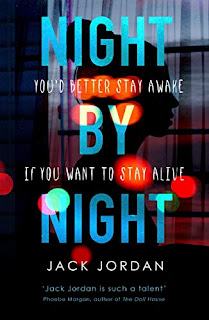 Rose is an insomniac who has experienced more than her share of personal tragedy. One day, she comes across a journal, apparently written by a man who thinks he’s about to be murdered. When she takes it to the police, they don’t want to know. And before long, Rose has unravelled a dark, far-reaching conspiracy around the disappearances and deaths of several young gay men, including her own brother. The police, she realises, are not acting, partly because of institutionalised homophobia and partly because the case seems somehow close to home. Rose upturns her whole life pursuing the author of the journal and, when she fears the worst, pursuing justice.

Jack Jordan’s writing style is gripping. Night By Night (2019) is a page-turner. It’s also visceral and immersive. You feel what the characters are feeling, you see and hear what’s happening to them. You forgive the fact that somehow a man keeping a daily journal somehow knows what’s going to happen months in advance, and the author’s fondness for naff names. Because the story itself is so gripping. I read this with Pigeonhole, an online book club that gives you the book in ten (or ten-ish) daily chunks and facilitates group discussion via comments in the margins. It’s my first experience of Jack Jordan, and after reading I went on a Kindle spree to scoop up his back catalogue.

The novel is peppered with frequent references to a real serial killer. Stephen Port killed four gay men in London  in 2014, and the police did not do enough to stop him or to catch him. As one character says, ‘he continued to get away with it because the police failed to act in almost every way.’ Thereby, Jordan makes clear the social relevance of his novel.

There are ruthless, horrifying scenes of violence. And there are outright preachy bits. And there is a lot of misery and tragedy. But the moment that really stood out to me — that made me so emotional I had to stop reading for a bit — was a very simple, totally inexplicit one. Towards the end of the story, when the guilty party has been found out, Rose finds a diverse set of mobile phones, which belonged to the victims. They’ve all been gutted of sims and batteries and left, together, in a drawer. And something about that moment was incredibly haunting.

Several readers in the running comments pointed out that they weren’t enjoying the violence or, more often, the implausibility. The first case of this occurred when a male character meets an attractive man outside a coffee shop, gets chatting, and leaves with his number. ‘Who would accept a phone number from a stranger?!’ people quipped. Those people, I would guess, have little experience of gay culture, where merely being out to each other is a tremendous icebreaker. The narrator doesn’t always make rational choices — again, readers cried foul. But the narrator is an insomniac tortured by grief and guilt. Of course her choices aren’t going to be rational all the time. It would be implausible if they were. And there’s a scene with a psychiatrist who acts … well, very unprofessionally. ‘A psychiatrist would never do that!’ Again, I have a real-life story that says otherwise. So, when everyone started moaning about the implausibility of a character escaping from being buried alive — something I don’t have experience of — I wasn’t hugely inclined to listen to them. In fact, I think that the fact that so many people found so much in this novel hard to swallow helps the author make his point.

Rose visits a police station and is disorientated by the lack of a two-way mirror and the general inhospitality of the set-up. Her ideas of what the police would be like have been conditioned by glamorous crime dramas on TV, but the real world is much less polished, more human, and nastier.
Posted by A Sign of the Crimes at 22:37