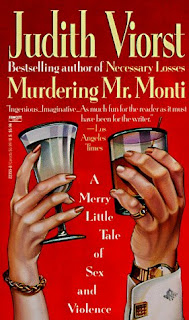 Murdering Mr Monti (1994) by Judith Viorst. Judith Viorst is best-known as a self-help author, which is also the profession of this novel’s narrator. The opening gives you a good idea of the tone of the book, and also its American-ness: ‘I am not the murdering kind, but I am planning to murder Mr Monti because he is doing harm to my family. I don’t look like the murdering kind, being a short, blond, rounded very married lady, with bifocals and a softness under the chin. On the other hand, I don’t look like the kind who, just a few weeks before her forty-sixth birthday, slept with three different men within twenty-four hours. And since I did indeed do that, I might indeed be able to murder Mr Monti.’ A fun opening, and I bought the book on the strength of it, but the whole thing progresses along those lines and never really gets any further.

Deal Breaker (1995) by Harlan Coben. Harlan Coben is a guilty pleasure for me, and I justify it by reading the novels through a Sedgwickian lens. That is to say, I follow the theorist Eve Kosofsky Sedgwick to read homosociality and what she called homosexual panic in masculine relationships. So, it is interesting that in Deal Breaker, two men — one preternaturally good looking — are allowed to bond intensely with shared memories of sleeping in a bunkbed at university, as long as a woman crops up on the next page and one of them talks about sex with her. There’s a lot of that sort of thing in Deal Breaker. It’s the first to feature Myles Bolitar, a sports agent whose client is horrified to discover his dead girlfriend apparently alive and advertising her services in a pornographic magazine. This is an easy read that you can whizz through in one sitting without thinking too deeply about it.

Hollow Crown (2002) by David Roberts. It’s 1936. Lord Edward Corinth (a pound shop Lord Peter Wimsey) is joined by left-wing journalist Verity Browne (a pound shop Harriet Vane) to investigate a murder, having originally been commissioned by Wallis Simpson, mistress to King Edward VIII, to recover some compromising letters.  This is a cosy, mindless mystery, peppered with references to the coming war. We know a character is stupid if they say stuff like ‘Hurrah for the blackshirts!’ and insisting, almost unprovoked, that there won’t be a war. They will of course always be challenged by a level-headed aristocrat who sees what we, with glorious hindsight, see: that war is coming and that it’s not necessarily a good thing. David Roberts has also developed a knack of getting in cliches by the back door. He simply ‘puts them in inverted commas’ and adds the words ‘as people say’, which somehow stops it from being bad writing. Not my cup of Ceylon, I’m afraid.

A Woman Unknown (2012) by Frances Brody. Kate Shackleton, Frances Brody’s northern interwar detective, is a delight. Here, she is roped into investigate the mysterious activities of a young wife and ends up looking into the murder of an American banker. One thing I particularly enjoyed about this novel was the focus on cameras and photography, which is not presented disingenuously as a new technology but showcased as a fashion. People collect cameras and boast about the comparative pros of their preferred models — which is how it must have been, of course — and the whole photography craze becomes important towards the end.

The Zig Zag Girl (2014) by Elly Griffiths. The first Stephens and Mephisto mystery showcases Elly Griffiths’ Golden Age influences, and proves that she is a rounded novelist who can master the detective genre from a range of angles. Set in Brighton in 1950, this novel is completely different in tone to the Ruth Galloway series. The opening line — ‘“Looks as if someone’s sliced her in three,’ said […] the police surgeon, chattily’ — introduces us to a narrative thats lightness of tone leaves the gives the understated darkness more power. The plot here takes us into the world of stage magic, with some absorbing, linger-in-the-mind characters, and a few caustic references to my home town, Great Yarmouth, which are always welcome.
Posted by A Sign of the Crimes at 22:23