Footsteps in the Dark by Georgette Heyer 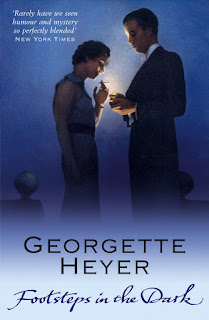 Several years ago, I read Georgette Heyer’s A Blunt Instrument and found it highly entertaining for all the wrong reasons. It struck me as everything detractors claim the Golden Age was: snobbish, dashed off, poorly written and proofed (even in a twenty-first century reissue), and ephemeral. I identified the murderer on page 2, found the humour funny only insofar as it was alarmingly antiquated even at the time it was written, and laughed for about ten minutes at a statement along the lines of: ‘The deceased made no response, because he was dead.’

Several of you have told me to give Heyer another chance, and I do in fact own copies of four more of her crime novels. Of these, I selected Footsteps in the Dark (1932), purely because I have a recent edition and am happier giving away new books than old books after reading them. As you can imagine, then, I came to the book with low expectations. I enjoyed the book more than I expected to. I do keep a reading journal — notwithstanding a well-known writer recently published a scathing critique of all their friends’ habits, wherein the idea of journalling one’s reading habits was roundly dismissed with ableist language — and in that journal I ended up giving the book a rating of 4 out of 6 (the 1-6 rating is preprinted; I don’t understand it but it works).

The plot can be summarised as The Hound of the Baskervilles meets Scooby Doo. A group of bright young things moves into a converted priory, which all the simple (of course they’re simple) locals avoid like the plague because it is haunted by the ghost of a ‘mad Monk’. Upon arrival, the new inhabitants start to notice apparently poltergeist activity, unearth secret passages and priest holes, and even get assaulted with a flying human skeleton. They even see the monk! Eventually - although not until p. 208 - there is a murder. The tale concludes with a damsel-in-distress scenario in an underground lair, and with the ghost himself being literally unmasked.

Heyer’s comedy is 90% ‘haha, look at how stupid the working class people are’, 9% ‘haha, look at how stupid foreigners [or, as servants call them, “furrinors”] are’, and 1% situational/slapstick/good. There is an entertaining scene in which the clueless residents decide to conduct a seance of sorts, only to have it interrupted by a policeman; the sitters and the sergeant exchange dialogue t cross purposes to great comic effect. Unintentional comedy comes in what I now think of as typical Heyer style: ‘the two men were accosted by a gentleman in clerical attire, who was buying stamps. He introduced himself as the Vicar’.

One thing that Heyer does well is educate modern readers about the workings of the upper classes — unlike Sayers, she wasn’t writing aspirationally but reflecting her own reality — and especially the prejudices within them. The thing that really struck me here, though, was the presence of a vacuum cleaner salesman. I had no idea that electric vacuum cleaners were around before the Second World War! So, I ended up doing some Googling and found out that they’d been around since the late nineteenth century. As with any rabbit hole, there are some fascinating stories in the history of vacuum cleaners and a good place to start is the Wikipedia page.

In terms of mystery, my prejudice blinded me completely. After my experience with A Blunt Instrument, I was so convinced that Heyer was not up to crafting puzzles that I didn’t give it much attention at all beside spotting a red herring and fixing on one suspicious non-suspect with the arrogance of certainty (for reasons explained below). The actual murderer was a character I’d almost forgotten by the time they were unmasked. All in all, a much more interesting read than A Blunt Instrument. I will try Heyer again, and I will not be throwing Footsteps in the Dark away just yet.

The plot owes a great deal to Arthur Conan Doyle’s The Hound of the Baskervilles — even down to talk of ‘luminous paint’. This is why, when a slight, nervy butterfly-collector called Mr Titmarsh appeared on the scene, I was convinced that I’d solved the case. My belief was bolstered when his some-time companion issued a cryptic warning to one of our protagonists to ‘get out, as fast as you can’. But, as mentioned, I was wrong. Apologies, Mr Titmarsh.

The crime revolves around a printing press and a book in the British Library, which tells the ancient legends of the house and is being used to control present events. When a plucky pair of bright young things are captured in a secret lair, they pass the time by playing inconsequential games — very redolent for interwar readers of inferior detective fiction.
Posted by A Sign of the Crimes at 15:16