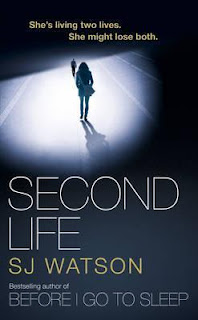 SJ Watson is, as we all know, the author of Before I Go to Sleep, which is impossible to dislike. His third novel is taking a while to surface but, based on the absolutely gripping, page-turning rollercoaster that is Second Life (2015), I reckon it will be worth the wait. Regular readers of this blog (if they exist) will know that I think the demand for one book a year from genre writers is ridiculous, stifling, and bad for everyone except booksellers.

This novel is narrated by middle-aged Julia, a wife and mother whose younger sister, Kate, apparently committed suicide. Convinced there’s more to the story, Julia starts investigating and finds out that Kate was a regular on dating websites. Julia sets up a profile and starts chatting to the men in her sister’s life. Before long, she becomes obsessed by one of them. And, more damagingly, the stranger becomes obsessed with her.

There is no neat solution to this story, which is a masterstroke, making the whole thing immediate and real. Not being a woman, I can’t be sure, but my impression is that Watson does a superb job at writing from a range of women’s perspectives. There’s also a really intriguing subplot, which is totally unexplored. I am 100% certain, based on how the characters speak and behave, that Julia’s teenage son is gay. But it’s never discussed; indeed, the parents (including the narrator) frequently talk about his ‘girlfriend’ (who turns out not to be a girlfriend). I’d love to know the author’s perspective on all of this.

And my sole go-to irk: the novel is written in the present tense, but it’s clear to me that the author wants to be writing in the past tense, betrayed through the use of ‘had been’ instead of ‘was’, and so on. At least 50% of contemporary thriller writers do this, and it barely detracts from a masterful second novel.
Posted by A Sign of the Crimes at 16:28