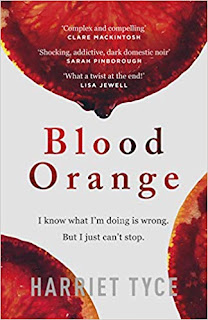 Criminal defence barrister Alison is, like most people living a perfect life, barely holding it together. She has a drink problem and she’s having an affair — and she can’t believe her clients, even when they’re confessing to murder. She’s also receiving anonymous messages.

The characters in Blood Orange are not glamorous, or sugar-coated. They are, like the food they eat, oozing, deceptively-dressed-up messes. And they’re very true to life. In fact, and this is a tiny point but something that is very telling, this is the only contemporary London thriller I’ve read in which the central character smokes without it being a huge guilty secret. It’s a fact of life that so many writers ignore, that people in high-pressure environments, especially in cities, smoke.

That’s not to say it’s bleak; it’s not. The realism is tense, the twists compelling, and the characters’ believability makes the first person narrative all the more urgent. You have to read on, just as Alison has to keep making the wrong choices.

I know that Blood Orange has been optioned for a TV series, and I can see it doing really well in that format. As a debut, it’s remarkable and Harriet Tyce is certainly one to watch.

This is a new feature I’m going to include in every full review, because I’m starting to think that the one thing crime fiction has in common is intertextuality. In this section of all subsequent reviews, I will be highlighting key moments in which the text reflects its own fictional status, or refers to crime fiction in some way.

In happier times, Alison and her husband used to watch The Wire. They try to rekindle some love and trust watching a ‘Scandi Noir’ boxset.
Posted by A Sign of the Crimes at 21:10