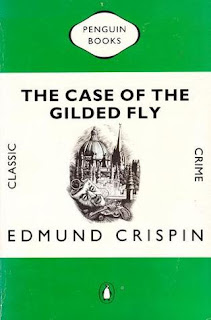 The Case of the Gilded Fly (1944) by Edmund Crispin. Crispin’s debut is a good place to start. A marvellous meta locked room mystery  featuring the eccentric academic sleuth Gervase Fen and revolving around the death of a promiscuous actress in an Oxford college.

The Mousetrap (1952) by Agatha Christie. There’s a reason Christie’s play is the longest-running in West End (and theatre) history: it’s bloody brilliant. I’m pretty much unique in thinking it is Christie’s best play, but I just think it’s perfect. And it features at least two LGBT characters, which is always a plus. A perfect balance of suspense, humour, familiarity, and fresh, contemporary horror, this story of a snowed-in post-war guest house visited by a murderer out for revenge remains relevant in most contexts. I must have seen at least a dozen productions (the West End cast changes each November) and it never gets old. The current incarnation is the best yet, so go and see it if you’re in London. If not, catch the UK tour or one of the regular amateur productions done in other countries. You won’t regret it.

Lord John and the Private Matter (2003) by Diana Gabaldon. Outlander, the TV series based on Diana Gabaldon’s time travel romances, is one of my guilty pleasures (and pretty much confirms me as a middle-aged woman in a dashing young buck’s body). This historical spy novel takes one of the supporting character from the Outlander universe, the gay-or-possibly-bi Lord John Grey who is a spy. I’m not generally a fan of historical fiction but found this engaging, and the research not too overwhelming or besides the point. It’s a surprisingly fun novel, too. You probably need to care about the characters to enjoy it, though.

The Widow (2016) by Fiona Barton. A stunning debut psychological thriller. Barton seamlessly inhabits a range of different voices, with the most effective being that of the journalist, Kate Waters, determined to solve an old case.

The Child (2017) by Fiona Barton. A very good second novel. Barton’s writing style is as engaging as ever. However, there is a big twist which I saw coming from the midway point, and it became increasingly difficult to believe that none of the characters could see it coming or at least think of it. It was a disappointment to have this twist be the big reveal and the end of the book.
Posted by A Sign of the Crimes at 19:07