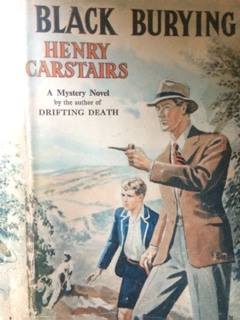 I enjoy Henry Carstairs’ mystery novels immensely, although I wouldn’t recommend them to many people. This is because, objectively, there’s not much to recommend them: they feel longer than they are, and are filled with rambling descriptions and internal dialogue. The investigations go round in circles, although the problems are generally very simple, and none of the characters are particularly interesting. Black Burying (1945) is Carstairs’ third novel to feature Lydford Long, and in this there is not even a dead body until the end of Chapter 15! An additional frustration is that several characters have similar names: Inspector Girdley, Sergeant Godfrey, Mr Gilchrist (who looks like Girdley), Sir Arnold Chevely, Mr Chatterton… I can’t imagine many people in the twenty-first century would bother with a book like this, and I can see why Carstairs remains out of print. However, there’s a certain wonderful escapism in spending time with Lydford Long.

Long (or Lyfdford, in the narrative) is a painfully shy man who wants nothing more in life than to be left alone and to sketch. His full-time job seems to be ‘amateur sleuth’ in that wherever he goes, someone dies and he sets around to solving each case without any prompting. In this book, he is helped by his some-time companion, a young boy called Phillip Bradley who puts some things together but mostly pops up to say ‘Gosh!’ And ‘Smashing!’, and by a dog called Spot. I laughed out loud when, in the second chapter, Lydford decided that he was bored so was going to see ‘his boy-friend’. My favourite thing about Lydford, though, is that he talks to himself. About 50% of the dialogue in Black Burying is Lydford working out the case with himself, alone.

Before summarising the plot, I’m going to quote the blurb because I find it loquacious:

Another absorbing mystery in which Lydford Long figures as investigator. When a party of people, of whom he chances to be one, goes for an autumn afternoon’s innocent picnic on the Downs, and one of the party disappears suddenly, completely and mysteriously, what then?

I bet this was written by the author. It just sounds so boring — and as if, midway through the sentence, he gave up. And there’s a sense throughout the novel that the author would rather not be writing a murder mystery. I know nothing about the author but, because he was writing during the war and everyone talks like an Edwardian, and because the obligatory meta-moments all reference Sherlock Holmes rather than anyone more modern, I’d guess he was elderly. The books stopped in the mid-1950s. The name Henry Carstairs sounds so much like a character in one of these novels that I presume it’s a pseudonym. Lydford is clearly a self-portrait because the workings of a shy mind are about the only thing in the book that are palpably authentic; also the author takes care to remind us that Lydford is tall and handsome, which is not uncommon when someone creates a fictional alter-ego on the sly.

So, Lydford is on holiday, staying in a country with people he doesn’t particularly like. Nearby are a little village and several nature walks. On one of this walks, another holiday-goer, Inspector Girdley, vanishes and several chapters later a body turns up. Without any prompting, for no apparent reason, and to nobody’s surprise, Lydford immediately sets about drawing diagrams and interviewing suspects in order to solve the mystery. Luckily for him, Philip, his ‘little invalid boy’ companion in a previous case (Drifting Death) is ‘spending his summer holiday, solitary, on an adjacent farm’, so Lydford and Philip happily pal up to solve the case.

While the set up is ridiculous and the writing is lazy — Carstairs is blatantly trying to fill space when he recounts a whole phone conversation over four pages that could be summarised in two lines (“Hallo! Is that Paget? Lydford here”, “Hello, this is Paget, who’s speaking please? Lydford, is that you?”, “Yes, it’s me,” and so on) — I was never bored reading. I don’t know why, exactly. Part of it is Lydford himself, who is such an excellent portrait of a shy man with a lot of unwanted attention on him. He is furious that solving the previous two cases in the series have given him a kind of notoriety, and he doesn’t like all the young women casting appreciative glances at him: he just wants to paint and sketch. He has no time for sex: ‘all girls were mysteries, and perhaps the only thing to do was to let it go at that.’ Yes, I really want to know about the author now.

Carstairs also turns some wonderful phrases when he wants to. At one point, he describes ‘a little man with darting eyes’ thus: ‘Everything about him was little except his obvious sense of grievance.’ Servants and locals do not get such sophisticated descriptions, however, and they speak in a painful-to-read vernacular. And I learnt some slang. ‘You have put your finger in the mustard!’ one character exclaims when another stumbles upon a hitherto-elusive truth.

There are eleven Lydford Long mysteries and so far I’ve read three. I have one more ready to read and will try to source the others, although I wouldn’t recommend these unless you’re a proper twentieth-century detective fiction geek.
Posted by A Sign of the Crimes at 15:58