The Way of All Flesh by Naomi Alderman 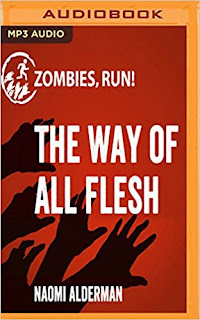 Audible subscribers, at least in the UK, get ‘free’ access to selected podcasts and serials. I didn’t know this until I was clearing out my spam folder, and came across some links. There are a few interesting things that we get for free and so far I’ve listened to three. This review is of a six-part drama: The Way of All Flesh (2017) by Naomi Alderman.

The story: Zombies have taken over and won the war against humans. The world is ending.  Nine human strangers seek refuge in a country house. Before long, one of them is murdered…  It soon becomes clear that one of the surviving eight is a murderer… but which one?

The Way of All Flesh is set in the Zombies, Run! universe (Google was my friend here). It turns out that Zombies, Run! (2012) is an iPhone and Android game developed by Naomi Alderman and Six to Start, which combines storytelling with running and other healthy stuff that’s not hugely on my radar. Wikipedia calls it ‘an immersive running game’, wherein players listen to the story — partly written by Margaret Atwood! — and their own music. I might give it a go, but I can’t imagine fleeing zombies to the strains of Ethel Merman and the Spice Girls.

The zombie craze was at its peak in 2012, and it’s still going today in a kind of appropriate dead-but-not-dead way. Two of my Netflix binges are iZombie, an absolutely ridiculous comic-book-inspired programme that’s just stumbled into its fourth series, and Santa Clarita Diet, which is one of the greatest shows ever made. iZombie has maintained its relevance in Series 4 by more or less ditching its police-procedural format (it began as a show about a zombie pathologist who solves the murders of the people whose brains she eats) and turning the whole thing into a not-so-subtle allegory on the topic of multiculturalism: it presents a world where humans and zombies appear to co-exist but persecution and propaganda surge behind the scenes. Meanwhile, Santa Clarita Diet, as the title suggests, satirises white-picket-fence aspirations and the American Dream.

The Way of All Flesh also has a kind of relevance-bid, in that it’s set in the aftermath of an apocalyptic war on zombies (or ‘zoms', in the parlance). Most crime fiction has a genre-referential moment, and in The Way of All Flesh it comes at the mid-way point, when the survivors reflect on Golden Age detective novels. The likes of Christie and Sayers, they agree, were popular in the aftermath of the First World War and the run-up to the Second, because they gave readers a sense of conclusion; of explaining death and disorder. In that scene, Alderman argues for her own story’s relevance in an increasingly unstable political climate.

The idea of a murder mystery set during the apocalypse has always appealed to me. I’ve always wanted to read one. I even attempted to write something vaguely along those lines as my Masters dissertation; a novella set on board the Titanic, in which the crime is explained while the ship is sinking and the passengers have to choose between staying to hear the truth and trying to escape without ever finding out (it divided the examiners). The issue here, though, is not a question of resolution — of whether the truth matters at the very end — but one of motive: why would anyone commit murder when everyone’s days are numbered?

The characters are all humorous archetypes — a journalist, a doctor, an academic, a TV celebrity — and there’s some enjoyable interaction. The egos clash nicely and, of course, hidden connections quickly emerge. However, I felt that the mystery story — which is, frankly weak — had very little to do with the zombie apocalypse. In fact, the question of why you’d kill someone during the end of the world, is quickly resolved: a strong desire for vengeance, and that is that. Vengeance could be a motive for murder in any time and any place. The setting seemed incidental. As the story progressed, I got the feeling that Alderman was not bringing her A-game. She is an absolutely brilliant author, incapable of writing anything bad. However, I got the impression that she wrote The Way of All Flesh quickly. Very quickly. It’s well-written, but I expected something … else. It’s three days since I stopped listening, and I’ve already forgotten all the character’s names. I’ve even forgotten which character died and which character killed them. And the acting is just dire. There is nothing to recommend the acting.

I don’t feel disappointed because this download was free. Based on the author and the idea, I am sure I would have paid for it (I mean, come on! Zombies! Murder mystery! Naomi Alderman!) and, had I done so, I would have been majorly irked. Each episode is 20 minutes long, so if you do choose to give it a go, it’s only 2 hours out of your life.
Posted by A Sign of the Crimes at 01:35