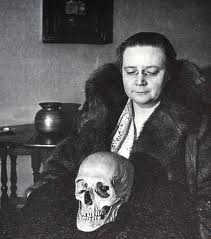 Lately, I’ve not had much time to read crime fiction. My two jobs – lecturing at a university and doing admin for a novelist – have meant reading a hell of a lot of books in completely different genres. That’s why my last two posts have been – cringe – recycled versions of reviews that are nearly five years old. I have, however, been getting my criminal fix by regularly checking my favourite blogs and also by dipping in and out of books. Today, I’ll be looking again at Dorothy L. Sayers; this time at a short story.

The three stories collected in Striding Folly (1972) are among the only pieces of Sayers’ ‘detectivism’ (her word) that I still had left to read. So I had a go at the title story, originally published in a 1939 anthology. Technically, this is a Lord Peter Wimsey tale, although His Lordship only appears three quarters of the way through, and doesn’t do much except polish his monocle and reference the classics. Then he identifies some hitherto unintroduced culprit, despite never having been given any details of the case, and disappears – a deus ex machina created by someone who no longer believes in that particular god.

We follow an evening in the life of Mr Mellilow, who is waiting for his friend to arrive for a game of chess. While he waits, a stranger pays a visit – a man called Mr Moses who endures that smarmy middle-class condescending antisemitism (on the parts of both the protagonist and the author) that certain other minorities experience today. The two men play chess for a couple of hours. Realising that his expected guest is a no-show, Mellilow goes to bed. He wakes up, prompted by a violent dream, and rushes out to a folly, where he finds that his friend is not just late for chess, but late as late can be.

When he tells the police about his alibi – he can’t have killed the man because of Mr Moses – nobody believes that Mr Moses exists … until Wimsey rolls up and sets everything right. The solution Wimsey expounds is amazingly flimsy. You know how, when you read a murder mystery, you can spot some bits but generally not work out a whole conclusive solution? Well, Sayers gives us the bits we can easily work out and anticipate and does nothing with them. It literally goes no further.

Personally, I had a much more elaborate solution in mind when I read this story, and I am fairly sure that Sayers was thinking of something along those lines. I wonder if she got bored writing ‘Striding Folly’ and just dashed off the ending, from Wimsey’s entrance onwards? I’m not sure of the circumstances of commission and publication, but I would be genuinely shocked if she wrote this story for anything but stone-cold cash.
As you might have gathered, I wasn’t wildly keen on this story, finding it a little pointless. Sure, there is something going on with chess: the self-conscious presentation of a strategy game in a genre that Sayers perceived to be reprehensibly fixated on puzzles at the expense of social and literary imperatives. However, she did something along these lines but with crosswords much more effectively in ‘Uncle Meleager’s Will’. All in all, ‘Striding Folly’ strikes me as uninspired, and little more than a Golden Age zombie.

Only read this final bit if you’ve already read the story, or don’t care how it ends:

If you would like to know the solution I think Sayers might have planned:  I think that Mr Moses had some kind of remote control device hidden in his left glove – hence keeping his gloves on and only using his right hand to play chess – which he triggered at ten minutes to nine (the exact time he fell into his first trap in the chess game, because his mind was elsewhere).  I think this set off some kind of electrical charge in a chess piece that the victim was holding, or which was in his boot, and which was later found by the body, or possibly switched with an identical piece by Moses after the event. There is precedence for this kind ending with Sayers; 'The Cave of Ali Baba' (1929) hinges on voice recognition software. Anyway, just a theory!