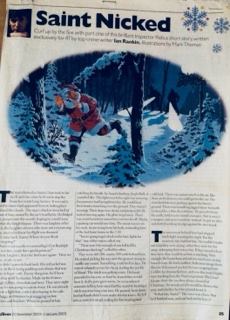 ‘The Adventure of the Blue Carbuncle’ (1892) by Arthur Conan Doyle. Sherlock Holmes is at his best and his worst in this story, which involves a mysterious stone being smuggled in a Christmas goose. There is an element of Dickensian goodwill in the resolution, which is more satisfying than usual.

‘A Christmas Tragedy’ (1930) by Agatha Christie. On holiday, Miss Marple suspects that a man is planning to murder his wife — because that’s the natural conclusion to draw from other people’s marital disputes. Part of The Thirteen Problems, ‘A Christmas Tragedy’ isn’t very Christmassy but it’s a decent, substantial story with a surprising emotional punch.

‘The Murder of Santa Claus’ (1984) by P.D. James. A gloriously self-referential, if annoyingly conservative, country house mystery featuring Adam Dalgliesh, with a bit of reflection on the death penalty thrown in.

‘Saint Nicked’ (2002) by Ian Rankin. A fun, festive, and insubstantial Rebus story, written for the Radio Times. The reader should not exert too much energy on this one, and I strongly doubt the author did.

‘The Tennis Church’ (2015) by Sophie Hannah. Charlie Zailer and her past are at the centre of this psychological mystery story. It bears all of Hannah’s signature wit and pith. You can read it, nicely illustrated, here.
Posted by A Sign of the Crimes at 14:04