Hats Off to Murder by D.S. Nelson 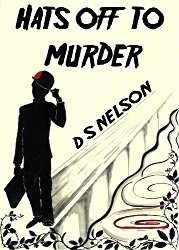 Hats Off to Murder is an easy read, and a rewarding one. Milliner Blake Hetherington has worked in his family-owned hat shop for years and got used to watching people and learning. Hats, he claims, become maps of their wearers. When two of his customers die, he becomes suspicious and investigates the deaths to see if he can find a link.
D.S. Nelson does everything a mystery writer should do: she entertains and informs. I read it because I like murder mysteries but now I know a bit about hats too! D.S. Nelson writes very simply and it's like having a conversation with Blake. Every now and then, we're treated to a paragraph about the history of various hats: the bowler, the beret, even the Breton.
Agatha Christie is an obvious influence (Christie's Miss Marple, after all, sat back and watched people, noting that "One begins to class people, quite definitely, just as though they were birds or flowers, group so-and-so, genus that, species that"). Another obvious influence is Arthur Conan Doyle, whose iconic detective made deductions based on objects like hats (ie. "The Blue Carbuncle"). This makes Blake's snooty dismissal of the deerstalker funny: "we are all familiar with the famous Sherlock Holmes and one can hardly fail to see a deerstalker [and think of him]. Made from checked fabric with faux fur lined side flaps, this hat was the sort of mass-produced nonsense I would not sell". Lol.
There are typos, and this would not win a creative writing competition. But neither would anything Agatha Christie wrote. There is the odd brilliant turn of phrase; for example, an exotic French lady "immersing me in a gaze that would have had the Saints confessing". One quibble I have is the length: longer than a story and not quite a novella.
Reading Hats Off to Murder, I felt like I was reading an interesting blog post. And in these contemporary times that is exactly what a traditional story should do. I'm looking forward to the next Blake Hetherington adventure, One For the Rook.

This review originally appeared on Amazon UK in 2013.

Disclaimer: I was given a review copy by D.S. Nelson.
Posted by A Sign of the Crimes at 15:00