Whose Body? by Dorothy L. Sayers 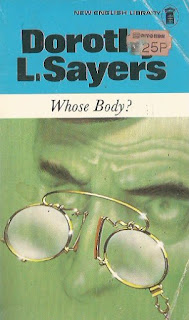 Forgive the horrible cover -- I always try to post the edition I read, and this is it!

Seriously, my opinion on Sayers changes with every new moon. At the moment, I like her books a lot, although a reread of Whose Body? (1923) does little to cement the notion that we're dealing with one of the greatest minds in twentieth century crime fiction.

Dorothy L. Sayers (1893-1957) remains a fascinating figure. One of the first women to graduate from Oxford University, she initially started writing detective fiction for pecuniary reasons while working in an advertising agency. Whose Body? was her first novel, and it was an immediate success -- so she went on to write about her detective, Lord Peter Wimsey, in several more volumes. As the series progressed, she also sought to stretch the possibilities of the crime fiction form, introducing ethical questions and thematic experiments. The ending of Busman's Honeymoon (1937) is rightly well-known for the unusual attention given to the psychological impact of sending a murderer to the gallows. Ultimately, Sayers abandoned crime writing in favour of translation and quite bad theology.

Sayers was very good at quotable quotes. Among my favourites is this, from Have His Carcase:


I always have a quotation for everything -- it saves original thinking.

But I also like a little poem she wrote (not sure where it comes from, as I've only ever seen it quoted):


As I grow older and older
and totter towards the tomb,
I find that I care less and less
who goes to bed with whom.

The first Sayers I read was Murder Must Advertise. I was quite young and determined to hate it because all the glossy crime scholarship I'd read sneered at the 'highbrow' pretensions of 'Miss Sayers' (use of the prefix should have been my clue that these were not discerning critics). So I was kind of annoyed to thoroughly enjoy it. I just told myself that I didn't like it because the murderer was easy to spot -- although that was very much the point. I then started reading her again at university, and now have two novels and a few short stories left to tackle.

But Whose Body? was a re-read. I'm sorry to say that I enjoyed this book less the second time around, but that's not to say I didn't enjoy it at all. It begins with His Lordship dashing out to an art sale, only to be assailed over the telephone by his mother, the Duchess of Denver, who informs him that a body has been found in a bathtub. And not just any body. This is the corpse of a man wearing nothing but a pair of pince-nez.

The plot is okay, but not substantial. It's not really a whodunit, because there are so few characters you spot the killer straight away and have fun watching Wimsey catch them. The best bit about the book is certainly Wimsey himself, who appears here fulfilling his author's stated aim: to create a hero who was 'part Fred Astaire and part Bertie Wooster'. His first dialogue is 'Oh, damn!' (this may sound silly, but the comma shows that the author takes the written word seriously), and these words -- which also open the entire canon -- are a rather nice way to set things off. When we meet Wimsey, he is described as possessing a 'long, amiable face [that] looked as if it had generated spontaneously from his top hat, as white maggots breed from Gorgonzola.' Phwoar.

Agatha Christie loved this description of Wimsey, and when Sayers gave her hero more depth, and a girlfriend, Christie got miffed and wrote a gloriously passive aggressive account of Sayers' (and others') work for a Russian newspaper. She concluded that Wimsey's marriage, which happens somewhere between Gaudy Night (1935) and Busman's Honeymoon (1947) had made him 'a good man spoiled.'

Even at this early stage, however, Wimsey has more psychological nuance than many of his peers. He suffers very clearly from shell-shock, and there is a genuinely shocking scene in which he experiences night-terrors, reliving his horrific experiences on the front line in France during the First World War. This scene also gives Bunter -- in many ways, a cross between Wooster's Jeeves and Poirot's George(s) -- more depth than one might expect from such a conservative writer. We see his servile position as one based on mutual dependence, friendship, and the great equalising consequences of war.

There are some issues in this book that I don't think we can ignore. Many of the golden age crime writers were downright anti-semitic, and I don't think we can excuse this as being 'of its time'. I think it's important to call it out.  Writing in a Jewish e-zine, Amy E. Schwartz has called Whose Body?  'a welter of obsession with Jews': it begins with an apparently Jewish corpse, proceeds through numerous problematic quips (outlined in the linked article), and ends quite unrepentantly in the same vein. Apparently, the first draft of the novel had Lord Peter wowing the implied reader with his cheekiness by pointing out that the body in the bathtub cannot be that of a Jewish financier because it isn't circumcised.

Of course, Sayers toned down the anti-semitism in later novels, once she became aware of the problem's extent and reach -- nearly all the guilty writers did this, whether by design or co-ercement (and it's an area where Agatha herself falls regrettably short). This book, on one level, so drenched in problematic attitudes that it's about anti-semitism. But, at the same time, it's equally indulging-while-pointing-out hilarious snobbery, the death of class security, and the conflict between post-war trauma and post-war nostalgia.

Whose Body? is not a great novel. It's the work of an author still finding her feet, and working out what she wants to do or say with the genre. But any assessment must bear in mind what it spawned -- one of the most significant and interesting series of the golden age.
Posted by A Sign of the Crimes at 17:14