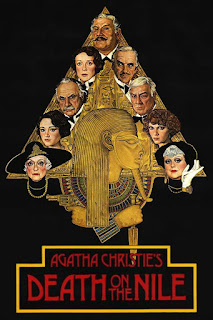 With Murder on the Orient Express still in the news, and about to be dropped in the USA, some themed mini reviews are in order. So here are my thoughts on 5 screen interpretations of Hercule Poirot.

Lord Edgware Dies (1934), directed by Henry Edwards. Yes, Austin Trevor as Hercule Poirot has no moustache. He also has a barely discernible accent and is generally without personality. However, this 80-minute film is surprisingly enjoyable, and astonishingly faithful to the book, notwithstanding Lady Edgware (Jane Carr) bursting into song half way through.

The Alphabet Murders (1965), directed by Frank Tashlin. There have been some real stinkers but The Alphabet Murders uncontroversially ranks as the worst ever Agatha Christie film. Tony Randall plays Poirot -- and Austin Trevor plays a butler -- as a creepy French pervert, with Robert Morley as a best of British Hastings. The tagline tells you the tone of this film: It's really no mystery how this girl can be MURDER ... it's as simple as ABC if you look hard enough! I spent years trying to find this film, and I will be spending years trying to forget it.

Death on the Nile (1978), directed by John Guillermin. Peter Ustinov's first and best outing as the eccentric Belgian detective, with a super-starry supporting cast. The scenery is beautiful, Ustinov is entertaining, with his own spin on the character, and the other players have delicious fun hamming up their roles. I feel like a whole generation of homosexuals needs to be told about this film, in which Angela Lansbury plays a drunk and Bette Davis and Maggie Smith have a waspish double act.

Murder on the Orient Express (2001), directed by Stephen Harrigan. Giving The Alphabet Murders a run for its money, this television movie comes in the worst-Christie-ever stakes at a close second. It's set in the modern day, which means that when Poirot (Alfred Molina) finds himself stuck in a train with a dead body, he just whips out his laptop and Googles the victim, thus instantly finding out who is lying about not knowing him.  The number of suspects was changed from 12 to 9 -- with devastating results, if you know the story -- and the Orient Express seems to have become a train that people take on their daily commutes. Molina is actually fine as Poirot -- i.e. fine as a modern detective with a European accent -- but the whole film is so egregious and pointless that it's impossible to watch without drowning in a pool of despair.

After the Funeral (2005), directed by Maurice Philips. David Suchet played Poirot in seventy episodes of the long-running ITV series. Some outings were better than others, and After the Funeral ranks among the best. For many, Suchet is the definitive Poirot, in that he has the detective's mannerisms and physicality to a T. He has taken large parts of his characterisation directly from the books, but he also takes Poirot himself seriously; we're encouraged to laugh with, not at, the detective. After the Funeral is one of those examples of dramatists trusting their source material, too: no extraneous sex or violence has been added and the result is a fast-paced, ingenious, and ultimately creepy 100 minute mystery drama
.
Posted by A Sign of the Crimes at 12:20