Monsieur Pamplemousse and the Tangled Web by Michael Bond 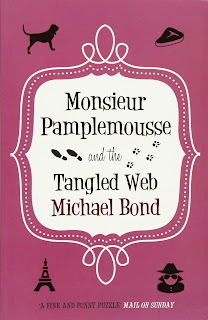 It was news to me that Michael Bond (1926-2017), the creator of Paddington Bear, wrote a series of comic crime novels in his last three decades. I learnt this fact when, browsing a charity shop, I came across a pristine copy of Monsieur Pamplemousse and the Tangled Web (2015), the last entry in the series, which began in 1990.

As soon as I saw the book, and ascertained that the author was the Michael Bond, I knew I had to own it. Paddington was a big part of my childhood, and although my lovely blue omnibus has long since gone missing, I remember it vividly. I still have my Paddington’s Christmas picture book. So, yes, without even reading the blurb, I forked over 75p and took the book home.

Unfortunately, it’s going straight back to the charity shop. Perhaps the series went downhill as the author approached his nineties, but somehow I suspect that all the instalments are pretty naff. At any rate, I’m not going to find out. This was my first and last brush with Monsieur Pamplemousse.

The hero of the book is a completely uninteresting retired policeman-cum-food critic in France. Accompanied by a massive talking dog called Pomme Frites, he gets embroiled in various capers and meets a range of characters who are, I think, supposed to be eccentric. The case here has several strands which are woven together at a late stage, and it starts with a Pamplemousse deciding to show Pomme Frites a massive, expensive truffle and being shocked when the dog eats it.

Meanwhile, a gangster’s niece is due to arrive at the offices of Le Guide, where Pamplemousse works, and a disgruntled diner complains about the state of his steak. Before long, the restauranteur responsible for the bad steak is murdered. As these problems weave together, I think the tradition is supposed to be French farce, but it is a curiously innocent and insubstantial take on the genre. Perhaps Paddington is too much in my head, but this book felt like something an eight year old might write in collaboration with their eighty year old grandfather.

I gather that the series’ USP is supposed to be detailed descriptions of food and wine. There were a few food-y descriptions in here but they were the passages I skipped and I’m afraid I neither marked nor can find them. There were also no memorable, identifiable, or endearing characters (some people might disagree with me when it comes to the dog, but, really, I found him to be boring as hell).

The whole thing has left a bitter taste in my mouth — a shame, because I wanted to taste the rich French wines in which I imagine the author indulged to get the creative juices flowing. Now I feel like Paddington can’t have been as wonderful as I remember (to be honest, I’ve had my doubts about that bear ever since I saw the trailer for the jingoistic claptrap that’s masquerading as a movie). Sadly, this book was not for me.