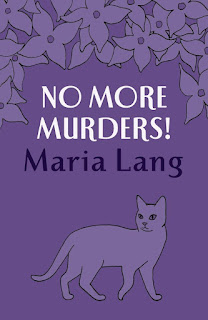 The Moonstone (1868) by Wilkie Collins. T.S. Eliot called The Moonstone ‘the first, the longest and the best of modern English detective novels.’ Agatha Christie and Dorothy L. Sayers made similar remarks. And — while each of those points is demonstrably not true — the remark holds, idiomatically. The Moonstone is a fascinating novel that blends sensationalism and realism. Most major crime fiction has its origins in this book (I’m looking at you, A Study in Scarlet), and the whole thing is compulsively readable. I’ve never met anyone who dislikes The Moonstone, and I think that every crime fiction fan should read it.

No More Murders! (1967) by Maria Lang. Enjoyable escapism from ‘Sweden’s answer to Agatha Christie’ — and, for once, the accolade seems well-earned. Reading this book in translation made me feel the closest I’ve ever felt to reading a new Christie book. It’s not quite the same, and Lang has her own voice, but the complicated plot, the sense of fun, and the poetic beauty of the setting all work brilliantly. I derived considerably more pleasure from No More Murders! than from the TV adaptation, which I also enjoyed.

Country House Murders (1989) edited by Godfrey Thomas. This is one of the best of those massive Michael O’Mara anthologies from the 1980s and 1990s. It features an impressive roll of authors: Christie, Rendell, Marsh, James, Allingham, Innes, Sayers, Wodehouse(!), Chesterton, Blake, Collins, Brand, Orczy, MacDonald, Doyle, Hare, Freeman, Barr, Wills Crofts, Carr, Ethel Lina White, and James Miles — only the last of which was new to me, and all stories are on the classic country house theme.  Besides featuring the titles you’d expect (James’ ‘A Very Desirable Residence’; Doyle’s ‘The Adventure of Abbey Grange’), it includes some unexpected delights, such as ‘The Man on the Roof’ by Christianna Brand, and ‘The Worcester Enigma’ by James Miles, in which Sherlock Holmes inspires Elgar’s Enigma Variations. So, now we know!

An Expert in Murder (2008) by Nicola Upson. Upson’s first book to feature Josephine Tey as a detective is set in the West End in the 1930s. It’s a nice nostalgic whodunit, with a really interesting plot. I did find, however, that the narrative didn’t really suit Tey — either as a writer or a character. Upson’s Tey bears no resemblance to Elizabeth Mackintosh herself, but is a kind of everywoman-Scottish-crime-writer, and the story architecture bears little resemblance to her own. I’d have enjoyed this more if the sleuth had been an original character… but, then, in all honesty, I probably wouldn’t have heard of it, let alone read it. So props to Upson.