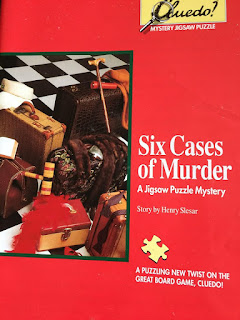 You can imagine Young Jamie -- when he was still Disappointing James -- basking in delight at the existence of a murder mystery board game. As I'm sure I don't need to tell you, the long-lasting board game is basically Happy Families with murder, and it's been around for decades. In fact, it was originally pitched as Agatha Christie -- the Game, and my very first blog post (on my personal website) was on the game's subversive potentials.

As an undergraduate, I became semi-famous for my Cluedo parties. Anywhere from 6 to 36 people would roll up, dressed in the various Cluedo colours. We'd drink appropriately coloured drinks, play however many simultaneous games, and watch the film Clue (which, to my mind, is a sub-par version of Murder by Death, but, hey, you can't be choosy when people are finally letting you geek out). It all ended when I moved to Exeter and tried to host one such party. At Chester, my friends were mostly churchy people, who were contractually obliged to enjoy each other's company. At Exeter, my friends were mostly members of the LGBTQ+, who were contractually obliged to sleep with and hate each other. Not the right crowd.

So, as I was writing an MA project on Cluedo (a novella called Anyone's Game... there'll be a revamped version on Amazon later this year), I took a private retreat in the world of the game. I discovered, on YouTube, an old ITV series of the same name. Go and lose several hours ploughing through it, and you'll thank me. The premise is similar to Simon Brett's Radio 4 show, Foul Play, except here we have the same six suspects in various different set-ups. Each episode, a new story was played out, in which a stranger to Tudor Manor is murdered, and the two panellists have to question the suspects to discover whodunit, how, and where. I particularly remember June Whitfield playing Mrs White as a drunk, and Joanna Lumley playing Mrs Peacock as... Joanna Lumley.

Last week, whilst charity shopping with a budget of exactly £1, I came across a big old bin of board games for 10p each. Among these games were several mystery jigsaws. You might know the sort of thing -- a little booklet gives you a mystery, and you piece together a jigsaw which contains a visual clue before reading the solution. There was, in the 1990s, a whole set of Agatha Christie games which were frankly terrible. Oddly, the best one I've ever played was a Murder, She Wrote jigsaw, which was lying around in a holiday barn in Wales. However, two of the jigsaws in the charity shop bore the Cluedo  brand: these were a completely new thing for me, and I was delighted to find them. So, for 20p, I snapped them up and set to work. 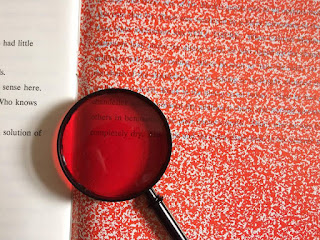 In some games, the solution comes in a sealed envelopes, more often it's in mirror writing at the back of the book. However, the Cluedo jigsaws have a unique 'special Cluedo magnifying glass' (effectively, a lump of plastic with a red filter), which turns white things red -- the solution is printed on a mottled red and white surface so that when you run the magnifying glass over it, all becomes clear (see image). Neat.

Opening the box, I was surprised to see that the story was by Henry Slesar, a well-known American genre-writer, whose Enter Murderers (1960) will be reviewed on this blog later in the year. The game is clearly supposed to tie in with the TVseries (either the ITV version or the American one) because the characters all have the same Christian names as on the screen -- Jonathan Green, Vivienne Scarlett -- and photographs of actors are used. The timeframe also adds up: this game was released in 1993. 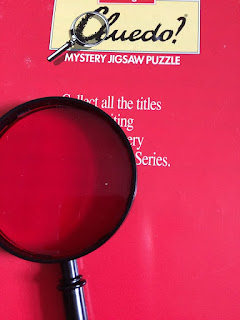 The mystery is okay, but not great: so, Dr Black owns Tudor Close and invites these six guests, all of whom he loves and all of whom want him dead. Miss Scarlett wants to inherit the property and turn it into a beauty spa; Colonel Mustard wants to inherit it and turn it into an old boys' club, and so on. There are some entertaining bits of dialogue in the brief story, particularly between Mrs Peacock and Miss Scarlett, and Mrs White and... everyone. During the first night of the weekend, Dr Black is murdered, but by whom? Perhaps the six suspects' suitcases hold the answer (... geddit, 'Six Cases of Murder'? Sigh!).

The jigsaw is hard to do. It took me four days -- and I'm currently experiencing a bout of depression, so expected to hurtle through it in two or less -- and there are each of the suitcases has a similar pattern, making the challenge rather wonderful. As for the mystery itself, I think it's silly -- but perhaps that's because I didn't solve it! I spotted the killer (the only character who is described in the booklet in any specific detail; i.e. the only character who has interests beyond those implied by their character description) but not the 'how'. The evidence is there in the picture, but I think that unless you have it explained to you, it's impossible to see that way. In fact, the incriminating item actually looks like part of a suitcase.

All in all, the experience was great fun, but I felt very slightly cheated at the end. Before sampling the other Cluedo jigsaw, I'm going to have a go at one of the marvellously early-90s standalone jigsaws sourced from the same bin (Death by Diet, if I recall correctly. Enjoy picturing the bouffanted models in the photos).