The Eleventh Little Indian by Jacquemard-Sénécal 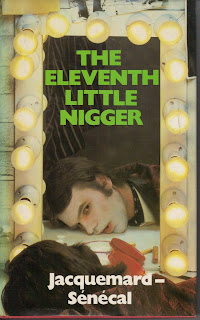 This is a fascinating French novel from the 1970s and, although I read the first English translation, I’ve given it its slightly less offensive US title here.  The Eleventh Little Indian (1979) is currently out of print, but hopefully it will be picked up by one of the small presses with a suitable new title. The edition I have was published by Agatha Christie’s own literary home, the Collins Crime Club.

Yves Jacquemard and Jean-Michele Sénécal were established playwrights when they wrote the book as their debut in 19976 and submitted it as a candidate for the Prix du Quai des Orfèvres. The prize committee - or possibly the publishers - rejected the novel as ‘too daring’, possibly because of its offhand dealing with homosexuality (that’s purely a guess), and the authors dashed off another novel, by all accounts inferior, which won. Sadly, Jacquemard died in 1980 at the age of 37, cutting short an interesting partnership.

I’m currently rehearsing for an amateur production of Christie’s And Then There Were None, using the book’s ending as opposed to the play’s traditional one, so the premise for this was irresistible.

A French theatre company is performing a special new adaptation of And Then There Were None, using the book’s original ending. One evening, the actor playing the murderer turns up late to the dressing room and finds all ten fellow cast members dead. At his own dressing table is an eleventh victim — someone apparently unknown to everyone, wearing theatrical make-up.

What follows is an often witty and generally enjoyable investigation into a complicated backstory, as the central character, Paul Samson, and policeman Hector Parescot (note the initials) join forces to uncover the link between these apparently unconnected actors, the identity of the eleventh corpse, and the murderer’s name.

The solution — and the several red herrings and backstories — owe a lot to Agatha Christie, whose books weave in and out of the plot through indirect or direct nods.  I particularly enjoyed the character of the gay director/writer who has a cherished collection of Christie’s novels, because he reminded me of so many real Christie fans. This is the first time I’ve seen authors address Christie’s camp legacy so directly, and the fact that the book was published so soon after her death and — in English, at least — by her own publishers, is rather nice.

My only gripe was that the narrator does not play fair, and I don’t mean that in any artificially indignant Roger Ackroyd-y way. The narrator actually lies us, the readers, at a key moment. Perhaps that was an issue of translation. There’s only one thing to do … I must learn French and read the original!

As several characters promise throughout the course of the investigation, you will find the solution in the pages of Agatha Christie. But it won’t be one of the more famous ‘twists’ you’re being pushed towards at every turn. I put down this novel with a very specific feeling of ‘How could I not see that?’ that I haven’t had since reading Christie in my pre-teens. All in all, The Eleventh Little Indian is thoroughly recommended.

While there are several titles in French apparently by Jacquemard-Sénécal, all but one (which has also been translated, as The Body Vanishes) were written exclusively by Sénécal. It’s a shame, but perhaps this novel deserves to stand alone as a curiosity and a one-off.